Avoid it all costs 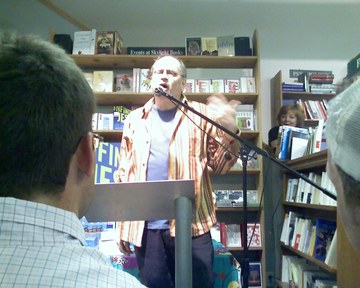 Before the official interview started on Thursday I talked a few minutes with Michael Silverblatt.
He spoke passionately about Thomas Pynchon (an author I have never read) and then explained why he would not mind dying. Most things he cares about had ceased to exist or were in the process of fading away. First and foremost he meant literature, or to be specific, a certain kind of literature. In the words of Michael Silverblatt: something that goes beyond the question how to get a date, in fictional form.
I believe that cultural pessimism should be avoided at all costs. Too often cultural pessimism is just complaints about a career that went south in disguise.
But I think that Michael Silverblatt genuinely felt that the things he cared about were in the process of disappearing.
“How can you still smile?” he asked.
“Well,” I said. “I go to my hotel room and will work a little bit more on my new novel.” In the taxi to my hotel I realized that Silverblatt might be right, at least from a certain point of view. The enemy is not winning; the enemy has already won.
But I’m not sure if this should be a reason for pessimism. Being defeated is a healthy point of departure.