Only the present is dreadful 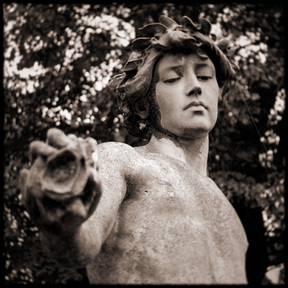 In the last issue of The New York Review of Books J.M. Coetzee reviews Nooteboom’s novel “Lost Paradise”. (This issue of the New York Review of Books is not yet online.) The review is not without hints of criticism but the overall tone is positive.
The biggest praise is heaped on Nooteboom’s previous novel “All Souls Day” – according to Coetzee Nooteboom’s “most ambitious project” and “at least for half its length – his most impressive”.
“All Souls Day” nor “Lost Paradise” made a huge impression on me. I still think that “Rituals” is Nooteboom’s best novel by far.
Maybe I’m not very sensitive to angels, which play an important role in “Lost Paradise” and to a lesser degree in “All Souls Day”.
The question of angels is the question of innocence, or at least the longing for lost innocence. This longing is foreign to me. (Although I agree that you can long for an innocent being to love. But there is no sexual relation possible with the innocent being, for sex is never innocent.)
I do sympathize with what W.G. Sebald said in an interview: “But at least about the past you can have certain illusions.” So we have illusions about the past, sometimes angel-like illusions, probably we have illusions about the future as well. (Why continue living without illusions about the future?) It’s only the present that is dreadful and disappointing.