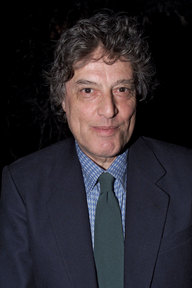 ‘Domestic arrangements are usually treated with great tact in Tom Stoppard: A Life, a biography which, although immodestly long and massively detailed, manages to avoid tabloid speculation. That it succeeds in establishing a relation between the man who sat down to breakfast and the formal completion of his ideas is all the more remarkable given Stoppard’s publicly avowed hostility to the genre.’

‘By “choosing” Professor Lee as his biographer (there has been at least one uninvited predecessor), Stoppard has taken “fallibility” on board and given her access to a large personal archive including the letters he wrote to his mother throughout her life (she died in 1996, aged eighty-five), sundry journals, drafts, screenplays and notebooks. In addition, there have been well over a hundred interviews – with collaborators, support staff, friends, relatives and lovers.’

‘At the same time, Lee’s academic skill in tracing sources pays off with a writer who is so very frank about his inspirations. She recognizes that if we are to appreciate Stoppard’s adaptation of other people’s ideas (and in that sense all his plays are “adaptations”) we need to know something about the original form in which they appeared. This leads to a digest of James Gleick’s popular Chaos: Making a new science (1988) as a necessary preparation for Arcadia (1993) and, when it comes to The Coast of Utopia (2002), references to Isaiah Berlin’s Russian Thinkers (1978). In effect, the biographer finds herself in a similar situation to the playwright: how to provide an audience, or a readership, with the knowledge they require if they are to grasp what is at stake. After all, “What gets onto the pages of the finished play is a tiny bit of what he knows: but he couldn’t have done that bit without knowing the whole of it”. This seems reasonable, although there are still times when the biographer’s précis appears more sumptuous than summary.’

‘When Pinter was awarded the Nobel Prize in 2005, Stoppard sent a calm rebuke to Christopher Hitchens who had queried his talent in characteristically forthright fashion, explaining the older man’s special significance: “It was – at the time – counter-intuitive to see that a shortfall of information, rather than surplus, is what can make theatre hold up the mirror, and that the effect is dramatic – funny, disturbing, fascinating … and not because the writer is withholding information tactically, but because he doesn’t know the answers.” On Pinter’s death he told his friend’s widow, Lady Antonia Fraser: “I hardly understood my own dependence on Harold’s existence”. As one of the foremost literary figures of his time, and as circumstances have increasingly demanded, he has become a composer of eulogies in which elegance and affection are emotionally yet effortlessly entwined. A fond tribute to his ever-loyal agent, Kenneth Ewing, had him remarking, “I’ve had dentists more show business than Kenneth”. Speaking at a memorial for a critic who had not always been kind to him, he told Kenneth Tynan’s children: “For those of us who were working in the English-speaking theatre during those years, for those of us who shared his time, your father was part of the luck we had”.’

‘Her subject was born in Czechoslovakia in 1937. With the Nazi invasion of their country, his parents, Eugen and Marta Sträussler, fled at first to Singapore. Following the Japanese conquest of the British colony in 1942, they were obliged to split up. His mother proceeded to India; his father stayed on but was killed when trying to escape by boat. From 1942 until 1946, his mother and her two sons were resident in Darjeeling. In November 1945, Marta married an Englishman, Major Kenneth Stoppard; by early the following year, they were all in the UK, and Marta and her boys were on their way to entering the English middle class. Tomáš Sträussler turned into Thomas Stoppard, underwent an English private education and, in the mid-1950s, started work as a Bristol journalist and thereafter as a freelance writer. The immense international success of Rosencrantz and Guildenstern made him famous and well-off. In the following decades he was also to become known, alongside the sequence of uniquely conceived plays, for political polemics that invariably turned on the question of free speech and free movement, particularly as these were repressed behind the Iron Curtain. He contributed to the work of Amnesty International and supported the cause of Václav Havel, the Czech dissident and playwright who would become a friend. Even so, his arguments tended to be quite abstract, with little sense of personal relevance other than the repeated insistence that personally he was inordinately lucky to be able to participate in an “English” democracy.’

‘Looking back, the publicly defining moment was an essay entitled “On Turning Out to be Jewish” published in Talk magazine in September 1999, a year in which he visited Czechoslovakia and talked to people who remembered his family’s history. He was still an Englishman, unquestionably, but he was also Czech, also a Jew. That legacy has come to dominate his plays: Rock ’n’ Roll in 2006, set partly in Prague, the epic culmination in 2020 of Leopoldstadt, set in Vienna. Yet at home he had seemed, at least in the 1980s, to align himself with conservatism in some of its more ruthless manifestations. Endorsement of “Englishness” had demanded grouse-shooting and the breaking of bread with Margaret Thatcher.”

‘There was a point in the course of his marriage to Miriam when Stoppard, as he would put it much later, “got upset about something”. This is followed by a wry third-person confession: “But that ‘something’ was not anything he would tell his biographer”.’

This is an excellent review, and although I’m not sure if I’m going to read the lengthy biography – I’m afraid that Tom Stoppard is not worth four or five days of my life – this review enlightened me, and ironically enough it made want to read Pinter’s work again, more so than it made me curious about Mr. Stoppard’s work.

Writing is withholding information, not tactically, that’s entertainment and nothing wrong with entertainment, but because you don’t know the answers.

My weakest point is that I know too much.