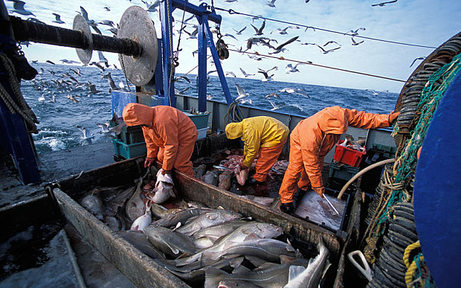 On fish and recent and less recent history – Daniel Boffey in The Guardian:

‘When the issue of the future access of European fishing fleets was being discussed by EU ambassadors in Brussels on Wednesday the Belgian government’s representative, Willem van de Voorde, made a notable intervention.
To the confusion of some, and the delight of others, the ambassador cited a treaty signed some 350 years ago by King Charles II which had granted 50 Flemish fishermen from Bruges “eternal rights” to English fishing waters. It was an important historical footnote illustrating the long relationship between Belgian fishermen and British waters, Van de Voorde suggested.
When the Privilegie der Visscherie was given in 1666, Bruges was part of the Southern Netherlands, controlled by Spain. The offer had been Charles’s way of showing gratitude for the hospitality he received when he stayed there during the interregnum that followed the decapitation of his father, King Charles I, and his own restoration to the throne.

“I wasn’t quite sure what he was on about but I think he was joking,” said one confused diplomat who had listened to Van de Voorde’s intervention. “But, then, you never know.”’

‘The UK has demanded a radical increase in fishing catches in its exclusive economic zone as it leaves the EU’s common fisheries policy.
Some in Brussels recognise the need to satisfy this demand – it was one of the key arguments made for Brexit during the 2016 referendum – certain coastal countries, including France in particular, are insisting on the status quo.
During the same meeting of ambassadors, the EU’s chief negotiator, Michel Barnier, pointed out that EU revenues from fishing in UK waters was around €650m, compared with €150m for British fishing in UK waters.
“I think he was suggesting that there was an argument for a change in the balance,” said one EU source. “It is going to be difficult though; no sign of France changing its mind yet.” On Thursday, France’s European affairs minister, Clément Beaune, said Paris would not “sell out” its fishing communities to get a deal.
After meeting with his Dutch counterpart, Stef Blok, in The Hague, Beaune told reporters: “Our fishermen will not be a bargaining chip for Brexit, they will not have to pay the price for Britain’s choices.”’

Somehow the Brexit feels almost like comic relief. Some might have treated the Brexit as comic relief from the beginning, but especially now it appears to be soothing.

Mr. Van de Voorde must have had the same inkling.