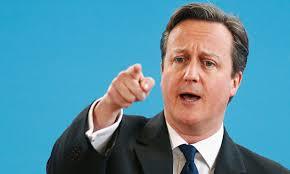 ‘Recently, it looked as though the two sides would be able to at least agree on a rudimentary deal that would prevent customs and tariff quotas. Such an agreement could significantly limit the economic harm produced by the UK exit from the EU, particularly for the UK itself. In truth, though, that is rather cold comfort: Essentially, the only choice now remaining is between an ugly divorce and an extremely ugly divorce.’

‘If there are any winners in this development, it is those people in Britain who see Brexit as a symbolic expression of national sovereignty. Because from an economic perspective, there will only be losers. Particularly in the UK, consumers will be faced with higher prices and less selection. Companies will be forced to deal with a radically altered trade regime, more bureaucracy and higher costs. The labor market will experience job losses. And politicians on both sides of the channel will be faced with difficult questions as to why their Brexit strategies didn't produce the desired results in the end.’

‘In early September, Johnson promised his fellow citizens a "good result" from the negotiations. Unfortunately, though, a confidential government document had been leaked ahead of his comments, a paper that outlined the "reasonable worst-case scenario." It reads like the screenplay for an apocalyptic BBC drama, including power outages, tight fuel supplies, food shortages on the Channel Islands and thousands of trucks backed up more than 100 kilometers on the nation's highways.’

‘Numerous British companies in the automobile and chemical industries have developed emergency plans to transfer some of their production to the Continent, should it become necessary. That means that tens of thousands of jobs in the industrial regions of northern and central Britain could be in danger - regions that delivered the Conservatives their election victory in December.’

‘It is quite possible that British supermarkets will soon be carrying champagne from California. But what will happen to the Scotch whiskey, the cheddar cheese or the rest of the around 80 British products that currently enjoy protection in the EU? Would Brussels block them from being imported? There is a significant risk that both sides will end up losing in the end.’

‘Despite the fact that the fishery is largely meaningless from an economic point of view, the dispute over the British fishing grounds has become one of the tallest hurdles for a trade agreement. The issue has become symbolic, in part because it is one of the few where Johnson has the most leverage. Britain wants to limit the access of EU fishing boats to its waters and renegotiate catch limits annually for every one of the around 100 species of edible fish. The EU is demanding continued access and is only ready to agree to catch limits that are valid for a longer period of time.
The message from Brussels has been that the EU will not sigh a deal that does not contain a satisfactory solution to on the fishing issue. In a video conference with Barnier last Wednesday, Germany Agricultural Minister Julia Klöckner clearly outlined the position of Germany, which currently holds the rotating presidency of the Council of the EU. In comments to DER SPIEGEL, she said: "I will not sacrifice the fishing industry for an agreement in other sectors."’

Just deserts? Well, a slight minority voted for this in Britain. Both sides will lose, the UK more than the EU. The outcome of direct democracy can be sheer destruction, of course a parliament is often only in theory an obstacle against overwhelming destruction.
An it’s good to remember that this all started with a seemingly moderate politician like Cameron.
But of course, Mr. Johnson was eager to make it as bad as possible.
And that the Brexit became an afterthought says a lot about the rather delightful times we are living in. One step to the light, two steps to the darkness.