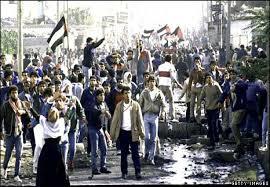 On the desire to be a clairvoyant – Anshel Pfeffer in Haaretz:

‘In December 1987, an academic conference was held at an Israeli university to mark 20 years since the Six-Day War. The guest speaker was Bernard Lewis, a renowned professor of Middle Eastern history, who said there were two miracles about the war. The first was Israel’s astonishing victory over Egypt, Syria and Jordan in June 1967. The second was that in the subsequent 20 years, the pressure cooker of tension created in the occupied territories had not exploded. The first intifada broke out days after his speech, sparked by the death of four Palestinians in a road accident involving an Israeli truck in the Gaza Strip.
One of those in attendance at Lewis’ lecture was then-Maj. Gen. Ehud Barak. At the time, Barak was the Israel Defense Forces’ deputy chief of staff – a post he had recently moved to from Central Command, where he was in charge of the West Bank. Barak, who would be Israel’s prime minister when the second intifada broke out in September 2000, likes to use the anecdote to illustrate how difficult it is to predict the outbreak of a third intifada.’

‘Ashraf al-Ajrami, a former minister for prisoner affairs in the Palestinian Authority, sees disillusionment with the leadership as a prime cause, noting that “an intifada is the decision of people, not the leadership.” He believes the scene is set for another intifada. “There’s a lot of rage and frustration with what’s happening on the ground and in the diplomatic arena. The conditions are ripe,” he says, except for the Palestinians’ lack of trust in their own leaders. “When people don’t see a Palestinian leadership that’s capable of taking advantage of an intifada and reaping benefits from it, they’re reluctant,” Ajrami explains.
That lack of confidence also means any potential protests aren’t focused specifically on Israel. “All of the disappointment and anger is not just with the Israelis, it’s with the Palestinian leadership and the Arab world as well,” he says. If anything, he adds, the closest the Palestinians came to an intifada in recent years was against the cybercrimes law passed by the PA in 2017 to suppress online dissent.’

‘The assessment within the IDF is very similar. Brig. Gen. Dror Shalom is the outgoing commander of the research department in Military Intelligence, and 20 years ago was a young major in charge of the team assessing the Palestinian leadership’s intentions. He attributes the prolonged period of calm to the relatively low-profile operations of the IDF and Shin Bet security service, which, he says, maintain “the fabric of life” in the West Bank and “the absence of collective punishment.” He also credits Abbas, “who understands that the second intifada toppled the PA and helped Hamas to take over Gaza.” The prospects of a third intifada will rise in the post-Abbas era, he believes. And though the 84-year-old Palestinian president is still in office, that era has already begun.
“The potential for a popular uprising is higher,” Shalom says. “The young generation is searching for a different path. It sees the two paths followed by the PA and Hamas as failures. At the same time, there are more succession battles” within Fatah. He sees two simultaneous developments: The breakdown of central power in the West Bank, with different factions taking over various cities and areas; and younger Palestinians at the grassroots level leading a “popular uprising.” Shikaki believes the older Palestinian generation is still in agreement with the leadership that the results of the second intifada were too disastrous to risk another one. His polling indicates that while a majority of Palestinians think a violent uprising would be justifiable due to “the anger, the frustration, the lack of hope,” the number of those who would actually be prepared to take part in such an uprising is significantly lower. The younger generation is awaiting leadership.’

The absence of collective punishment is probably a tad too optimistic, it’s always easier for the punisher to speak about punishment than for the one being punished.

But apparently the relative calm is merely a result of the zeitgeist that largely lost interest in the Palestinian-Israeli conflict, and a military apparatus that learned the lesson of restraint, kind of, never mind, it could happen again at any moment.

Waiting for the third intifada, without much hope that this one will achieve something.

And no desire or hope to take away the source of the frustrations.

Whether it's the virus or an intifada, politics is more and more a matter of crowd control.