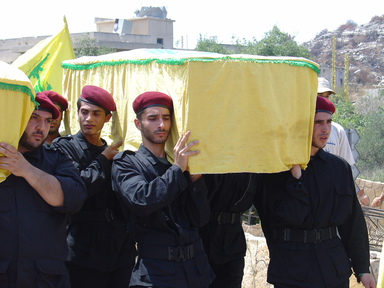 It’s about ten days ago that Imad Mughniyah, a top Hezbollah commander, was killed in Damascus.
Who is responsible for the killing is not yet clear. Hezbollah claims that Israel is behind it, but as a journalist with some experience asked me: “Does the Mossad do car bombs?” And above all can the Mossad operate with impunity in Damascus? A report on Debka points in the direction of the Mossad, although Debka claims that it is publishing a special inquiry launched by Hezbollah: “Their investigators claim that the Israeli Mossad tracked him down through the Palestinian operatives with whom he recently rendezvoused in Beirut and Damascus to coordinate a new wave of terror against Israel.”

It seems to be probable that Syria was involved as well.
There is evidence that the US and Iran clinched a deal about Iraq not too long ago. (Remember when the last National Security Report about Iran was published?)
Why not make a deal with Syria? But what did Syria get back for delivering Mughniyah? I guess it is good to keep in mind that almost everything is for sale. Even Al-Qaeda has basically become a gun for hire.