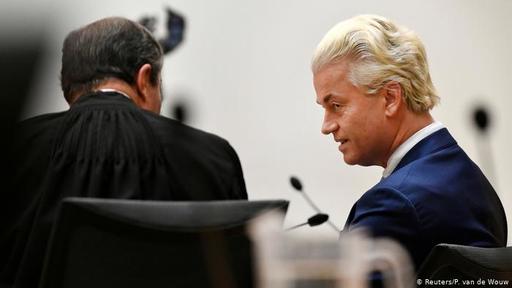 On a dilemma, sort of - Jotam Confino in Haaretz:

‘Interviewing the leader of the far right in the Netherlands and one of the most provocative politicians in Europe presents a journalistic dilemma. Geert Wilders has been accused of promoting racism for years, mostly against Muslims, and has called on Europe to ban all immigration from Muslim-majority countries.
But Wilders is also the leader of the second largest party in the Dutch parliament and has right-wing fans the world over – including in the most important address in Israel: Balfour Street, Jerusalem. Prime Minister Benjamin Netanyahu’s eldest son, Yair, has called Wilders a “true friend” of the Jewish people, and wished him success ahead of the 2019 European parliamentary elections. Netanyahu Sr. didn’t distance himself from his son’s endorsement.’

‘Wilders, 57, finds himself in an unusual position these days: Praising the policies of French President Emmanuel Macron, a centrist leader who defeated Wilders’ ally and ideological political partner Marine Le Pen in the 2017 French elections. Wilders views Macron’s recent crackdown on Islamist extremism in France, following the murder of a schoolteacher who was beheaded for showing a cartoon of the prophet Mohammed to his students, as vindication of his long-standing fight against Muslim immigration to Europe.
“To be honest, I don’t think Mr. Macron is very enthusiastic about the idea of having me and Marine Le Pen supporting him,” Wilders told Haaretz in a phone interview last week. “I’m sure he would like to have support from other heads of state. I’m not a fan of Mr. Macron, but I have to admit: at least he is acting. Unfortunately, we see this pattern every time there is a terror attack – whether it be in London, Madrid, Israel or even 9/11. People are upset in the days after, but then we go back to a normal routine and nothing changes. Europe simply hasn’t learned her lesson so far,” Wilders says.’

‘The Netherlands is widely seen as one of the most tolerant and liberal countries in the world, including when it comes to immigration. Wilders, however, claims that “waves” of immigration from Muslim countries – most notably from Turkey, Morocco and Syria – over recent decades have created an “identity crisis.”’

‘He reiterates to Haaretz that the Netherlands “should learn from Israel when it comes to dealing with radical Islamism. We should adopt administrative detention – especially when we have this problem with jihadists from Syria in our country. We have hundreds of those, according to our intelligence agency, and thousands who sympathize with them.” The practice is widely criticized by human rights organizations, though Israel says it uses it to prevent future terror attacks by arresting and holding suspects without trial for up to six months.
“I would rather have a few people jailed, even if later proven to be innocent, if it means our streets and families are safe,” Wilders sums up. “Administrative detention should of course be decided by security services and not politicians. And Europe should have done that a long time ago.”’

After all that happened with his main rival (Baudet) in recent Mr. Wilders has kept a low profile, probably for strategic reasons, but also because his strategic provocations don’t cause the uproar that they used to do.

Nevertheless, according to the latest polls Mr. Wilders’ party is poised to become the second largest one in the Netherlands.

The interview is filled with statements that are highly questionable. Many things happened after 9/11, I argued before that the responses to terror are often more destructive than terrorism itself. Even the by Wilders highly admired IDF has reached the conclusion that collective punishment is counterproductive. And how you can favor a state that holds suspects indefinitely without due process (administrative detention) while claiming that your society is based on Christian, Jewish and humanistic principles is unclear to me.
As it is unclear to me what is meant by Christian, Jewish and humanistic principles, probably nothing else than this another attempt to exclude Muslims.
The religious Christians and Jews have much more in common with religious Muslims than Mr. Wilders is willing to admit and most secularized citizens don’t know much about Christianity and Judaism and they don’t care. For most middleclass citizens in the Western World Netflix is identity enough, and then in December a Berliner Pfannkuchen (oliebol) or something like that. What is left of identity if you are not a minority (poor majority) is this vague desire to have an enemy.
Mr. Wilders is proof that the whole concept of Dutch and European identity in his mind is nothing more than having an enemy (the Muslims). Without the Muslims and what he is making of them Mr. Wilders would not have a program, would not have much of an identity himself and he would not have any claim to fame, he would not have a party.

Mr. Wilders is a fairly dangerous politician, but the fact that he fell in love with Mr. Macron is a sign that he is ready to give up on the idea that the EU should be dismantled.
And yes, I’m aware of the fact that Mr. Wilders still needs protection, that there are still zealots around who haven’t heard of the blessings of repressive tolerance.

But above all this interview, conducted by a not very well-informed journalist, is another proof that contemporary nationalists have nothing to offer but the highly imaginary enemy against whom they are willing to fight, well fight, pay lip service to the fight.
Mr. Wilders needs the Muslims, more precisely, he needs the imaginary Muslims, without them he is a void, without them the emptiness of the vessel becomes unpleasantly visible.