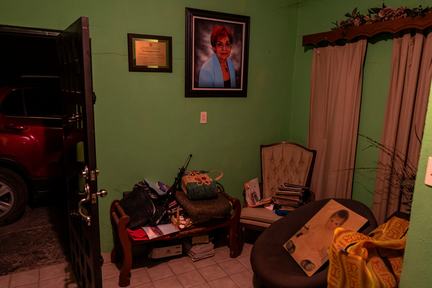 An extremely moving and important article by Azam Ahmed in NYT:

‘Miriam Rodríguez clutched a pistol in her purse as she ran past the morning crowds on the bridge to Texas. She stopped every few minutes to catch her breath and study the photo of her next target: the florist.
She had been hunting him for a year, stalking him online, interrogating the criminals he worked with, even befriending unwitting relatives for tips on his whereabouts. Now she finally had one — a widow called to tell her that he was peddling flowers on the border.
Ever since 2014, she had been tracking the people responsible for the kidnapping and murder of her 20-year-old daughter, Karen. Half of them were already in prison, not because the authorities had cracked the case, but because she had pursued them on her own, with a meticulous abandon.’

‘On Mother’s Day, 2017, weeks after she had chased down one of her last targets, she was shot in front of her home and killed. Her husband, inside watching television, found her face down on the street, hand tucked inside her purse, next to her pistol.’

‘Her stunning campaign — recounted in case files, witness testimony, confessions from the criminals she tracked down and dozens of interviews with relatives, police officers, friends, officials and local residents — changed San Fernando, for a while at least. People took heart at her fight, and found indignation in her death. The city placed a bronze plaque honoring her in the central plaza. Her son, Luis, took over the group she had started, a collective of the many local families whose loved ones had disappeared. The authorities pledged to capture her killers.
Scarred by a decade of violence, a brutal war between cartel factions, the slaughter of 72 migrants and the killing of Mrs. Rodríguez, San Fernando grew quiet for a time, as if spent by its own tragic history.
That is, until July of this year, when a 14-year-old boy, Luciano Leal Garza, was snatched off the streets — the most public kidnap-for-ransom case since Mrs. Rodríguez’s crusade to find her daughter.’

‘Townspeople marched, demanding justice for Luciano. Brigades searched mile after mile of barren scrubland for signs of him. His mother, Anabel Garza, charismatic and fearless, became a spokeswoman for the staggering number of missing people in Mexico — more than 70,000 nationwide — and the unrelenting tide of loss in a country where homicides have nearly doubled in the last five years alone.’

‘After a week, he stopped answering the phone. Others called, claiming to be the kidnappers. They needed a bit more money, they said, just $500. The family doubted it would bring Karen home, but they sent the money anyway.
With every payment, a new hope sparkled for Mrs. Rodríguez. And with every failed bid to reclaim Karen, she fell further into despair.”

‘For a city of about 60,000, San Fernando bears an infamy out of proportion to its size, a misfortune born of geography. The city lies along a principal route north through the state of Tamaulipas. Just outside city limits, a cluster of highways untangles, each leading to strategic border crossings with the United States. Off the motorways, dirt roads in the scrubland provide a web of smuggling routes ideal for traffickers.’

‘She froze when she found a stack of personal belongings tossed in a pile. A scarf that belonged to Karen and a seat cushion from her truck lay near the top.
Forensic agents claimed that Karen was not among the dozens of bodies they had identified at the ranch. But Mrs. Rodríguez fought the government on its analysis, and rightly so. The following year, the family said, a group of scientists found a piece of femur belonging to her daughter.
Most officials held a grudging respect for Mrs. Rodríguez, despite complaining about her foul language and pugnacious manner.
“Not everyone got along with her,” said Gloria Garza, an official in the state government. “But you respected her mission.” On the drive back from the ranch, Mrs. Rodríguez passed a barbecue restaurant near the entrance of the dirt road to the ranch. She had eaten there with Azalea only two days after Karen’s kidnapping.
At the time, a neighborhood resident she knew well, Elvia Yuliza Betancourt, had been seated at a table by herself, sipping a soda. Mrs. Rodríguez had said hello and asked whether she had heard about Karen. By then, everyone had. But Ms. Betancourt played dumb, which Mrs. Rodríguez had thought was odd.

Now, after driving by the restaurant again, it dawned on her: Maybe the young woman knew something. Perhaps she had even been watching the ranch in case the police came.
The dread twisted into rage. She had known Ms. Betancourt ever since she was a child, abandoned by a prostitute at the local brothel. She used to give her Karen’s old clothes.
Mrs. Rodríguez raced home and dove back into her research, discovering that Ms. Betancourt was involved romantically with one of Karen’s kidnappers, who was in prison for an unrelated crime.
Just as she had with the ice cream shop, Mrs. Rodríguez waited for weeks outside of the prison during visiting hours until Ms. Betancourt finally showed. The police came and arrested her, later discovering that some of the ransom calls had come from her house.
As the months passed, Mrs. Rodríguez continued to fill her bag with clues she wrung from the case files. But with each passing day, the trails grew more faint.
Some of the culprits were dead, others in jail. Those still on the street tried to forge new lives as taxi drivers, gas delivery men or, in the case of Enrique Yoel Rubio Flores, a born-again Christian.
Mrs. Rodríguez went to Aldama, his small hometown of about 13,000 people, and paid a visit to his grandmother. With a heavy sigh, the elderly woman told her that the boy had always been trouble, but at least now he was going to church.

Naturally, Mrs. Rodríguez began attending service. Sure enough, she found him there.
When the police came and arrested him, inside the chapel, the parishioners could hardly believe it, her family recounted. One asked Mrs. Rodríguez for mercy. She scoffed.
“Where was his compassion when they killed my daughter?” her family said she had replied.’

‘Her death gave shape to the impunity that twists everyday life in Mexico, and the government scrambled to react. Within a few months, it arrested two of the culprits, and killed another in a gunfight.
As for the people who ordered the hit, who feared her activism more than they feared the repercussions of killing her, they remain shrouded in secrecy.
Luis obsessed over who they were. But even he had learned the lesson his mother’s murder had been meant to impart: only push so far for justice.’

‘They knew they were among the fortunate few who at least had somewhere to mourn them. So many families never found their loved ones. That Karen and Mrs. Rodríguez now lay together was a small solace.
Luis and Azalea sat for a while as the sun’s bite softened, reminiscing in a way they rarely allowed themselves to do anymore. The cemetery emptied, but they stayed, clinging to the moment.’

Organized crime has infiltrated governments in many countries, but the impunity with which the cartels obviously have scared and/or infiltrated the judicial and law enforcement agencies in Mexico is hard to imagine.

Fear and intimidation are powerful against popular uprising against the criminals.

In 1992 after the killing of judge Giovanni Falcone the people in Sicily went to the streets because they couldn’t stand their own Mafia anymore.

Probably we won’t see any similar uprising in Mexico in the near future.

Also, the Mafia in Sicily hasn’t disappeared, the Mafia just became more discrete. And the state (i.e. the politicians) preferred to fight asylum seekers instead of organized crime.