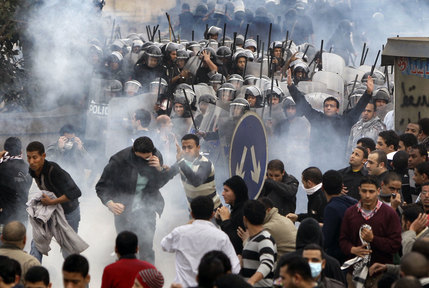 On the revolution and its aftermath – Zvi Bar'el in Haaretz:

‘“It’s true that we haven’t yet achieved freedom, but we can at least dream about it and imagine it,” Syrian civil rights activist Kenan Rahmani said three years ago. He was speaking in response to a survey by the website Raseef22 that posed the question “Would it have been better if the Arab Spring had never happened?” This month, The Guardian published the results of another poll, with more than 5,000 respondents around the Arab world, conducted on the occasion of the 10th anniversary of the eruption of the protests. Judging by the results, Rahmani’s view doesn’t have many supporters today. Out of the eight countries where Arab Spring uprisings took place – Tunisia, Egypt, Libya, Yemen, Syria, Iraq, Sudan and Algeria – at least 50 percent of the respondents in five countries said their situation today is worse than before the protests.
The exceptions were Egypt, Algeria and Iraq. In Syria, Libya and Yemen, 60 to 75 percent of those responding said they regretted the outbreak of the protests; in the other countries, about 40 percent did.’

‘But is it even fair to judge the revolutions solely by their success – or, primarily, by their failure – in achieving the participants' slogan of “life, freedom and human dignity” within the short span of 10 years? Does the current situation in the Middle East stem from those huge demonstrations, which toppled regimes and created new blocs? Can democracy in the Middle East, or the lack thereof, be judged solely according to universal criteria, or should it be judged in the local context?’

‘In some countries, the ousted dictators were replaced by even worse tyrants. Egyptian President Abdel-Fattah al-Sissi, for instance, is considered far more tyrannical than his predecessor, Hosni Mubarak. Bashar Assad still rules Syria after slaughtering hundreds of thousands of his own citizens. Iraq hasn’t yet recovered from the ouster of Saddam Hussein. And a decade after dictator Muammar Gadhafi was killed, Libya is embroiled in a bitter civil war.’

‘Success or failure in this context can’t be judged solely by local criteria or be based on a limited time period. The uprisings didn’t actually begin in December 2010, when the young Tunisian street vendor named Mohammed Bouazizi set himself on fire after police dismantled his stall and scattered his wares (one humiliated him further by slapping him in the face).
In Egypt, too, the embers were burning long before January 25, 2011, when the massive demonstrations that ultimately led to Mubarak’s resignation began. The first squeeze of the trigger was on June 6, 2010, with the death – or more accurately, the murder – of Khaled Saeed, a young Egyptian entrepreneur who was sitting in an internet café when two detectives arrested him, beat him viciously and slammed his head into a steel door until he died. Yet even that dramatic incident was just the culmination of a long process that began years earlier.’

‘Mubarak was actually the most flexible of the Arab dictators. He allowed some demonstrations to take place, permitted new newspapers be sold despite not granting them a license, and understood the pressure coming from Western countries.
In Tunisia, the iron first of Zine El Abidine Ben Ali penetrated deep into the guts of computers at the cafes where young Tunisians used the internet. Oppositionists, especially religious ones, were arrested and jailed, and some of their leaders were exiled. People were abducted and "disappeared." And all the while, the West applauded the dictator from Tunis, who spoke in Western, pro-American language.
At this stage in a revolution, protests can still be beaten down and stopped. But in some countries, such uprisings morphed into genuine rebellions of the type the security services couldn’t, and sometimes didn’t want to suppress. You have to grasp the depth of the distress, despair and anger to understand how much courage it took for these unarmed protesters to stand up to armed government forces.’

‘The transition from dictatorship to democracy requires political organization and groundwork that translate the protests into a democratic-political framework, move the demonstrations in city squares into parliament and turn slogans into party platforms. In this regard, the Arab Spring countries parted ways, based on their individual political traditions, socioeconomic structure and the nature of the contract between the regime and the public.
Tunisia ostensibly went by the book. It established a democratic government, drafted a liberal constitution and began functioning relatively quickly like a country that had embarked on a new era.
Egypt also started off as a ground-breaking democracy. For the first time, the Muslim Brotherhood was treated as legitimate, and thanks to its superior organization, even managed to win the presidential election.
Libya, Yemen and Syria were torn into pieces. In Libya, Gadhafi was murdered by a mob. In Yemen, President Ali Abdullah Saleh was ousted. And in Syria, President Bashar Assad is still sitting in the presidential palace. None of these countries have regimes that represent the entire population or a government that has won the public’s trust, and in all three, civil war still rages.
Just as revolutions don’t begin on the day proclaimed as such by the media, after some dramatic event becomes widely publicized – their end is also the result of a long process that can last for years. The questions that must be asked when examining the political changes resulting from a civil uprising are whether the revolutions actually sparked long-term shock waves in the countries where they took place, and whether they had an impact outside their own territorial boundaries. The answers go to the heart of a revolution’s success or failure.’

‘In the countries of the revolutions, the new regimes hastened to formulate laws and conventions which, on paper at least, paid due respect to human rights, freedom of expression, women’s status and the principles of equality, and were referred to as the “principles of the revolution” or the “spirit of the revolution.” In most cases, this turned out to be mere lip service, as these principles were crushed in brutal campaigns of suppression by the different regimes. Even so, at least there was a recognition by these regimes of the need for reforms – as long as the latter did not endanger the rulers’ survival.
In Egypt, for example, tough laws were passed against sexual harassment and harassment of women, and for the first time in decades, the president permitted the construction of new churches. In Saudi Arabia, which did not experience the waves of protest, women were eventually granted the right to drive and to work in dozens of professions from which they had previously been barred. The shock waves of the uprisings continue to reverberate. Street protests which in the past had quickly been suppressed by security forces, have brought down governments in Iraq, Lebanon, Algeria, Sudan and Jordan years after the Arab Spring revolutions ended.’

‘The term “Arab Spring” has lost much of its charm, particularly in Western countries where people teared up with emotion in anticipation of a wave of democratization that would sweep the Arab countries. When that hope was dashed, the West reverted to the comfortable Orientalist theories that “explained” the “hopeless” East – the same theories that never believed that anything like the Arab Spring could ever happen.’

‘You have to grasp the depth of the distress, despair and anger to understand how much courage it took for these unarmed protesters to stand up to armed government forces.’ Yes, indeed, but it’s also fair to ask whether the revolution produced tangible results.

We all agree that Sisi is worse than Mubarak, and it seems unlikely that the Biden administration will push Sisi successfully to be a bit less oppressive and cruel.
Maybe another revolution will come, and perhaps we cannot separate the revolution that might come from the events in 2011, but somehow the coming of the revolution and a more or less stable democracy feels a lit like the coming of the Messiah.

As to Egypt, Bar’el avoids the question what happened there after the Muslim Brotherhood won the free elections, was it a coup, a counterrevolution or an attempt to save democracy by killing it or all at the same time?

Also, we don’t need to step into conspiracy theory territory when we acknowledge that outside forces (US, Russia, Turkey, Iran et cetera) influenced the events in for example Syria, the revolution became a proxy war.

The risk of orientalism is real (they’re not ready for democracy, they are different) but it’s for everybody to see that the forces that don’t want and don’t need democracy inside and outside these countries are rather powerful.

And the strong man gained popularity elsewhere too.

But maybe another Arab spring will come before the Messiah.