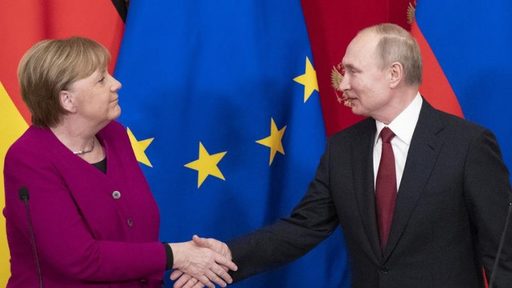 ‘Merkel’s visit to Moscow served as a prime example of traditional German policy toward Russia. The paradoxical principle of that policy is that you can have good and bad relationships at the same time, as long as you keep things neatly separated.’

‘That might sound strange to German ears. It was Putin himself and his secret services, after all, that had set off all the alarm bells in the West. But in Moscow, people are baffled that the poisoning of a Russian citizen in Siberia, of all things, has led to a sea change in German policy – a case the German government voluntarily brought into the country when it advocated that Navalny be flown to Berlin’s Charité University Hospital for treatment.
"If there had been this strong a reaction from the German side in the Khangoshvili case, with the accusation: 'We can’t allow Russian secret service agents to do their work in Berlin,’ Moscow would have understood. In the case of Navalny, though, the reaction is incomprehensible for the Russian side,” says Fyodor Lukyanov, editor in chief of the publication Russia in Global Affairs.
Observers in Moscow were completely taken aback when German Foreign Minister Heiko Maas also hinted at repercussions for the Nord Stream 2 gas pipeline project that is being built from Russia to Germany. "I certainly hope that the Russians will not force us to change our position on Nord Stream 2,” Maas told the newspaper Bild am Sonntag in September. But what, many in Moscow wondered, does a long-term, multi-billion-euro project have to do with the fate of a single Russian opposition politician? Why is Germany escalating the situation and sacrificing its own interests in the process?’

‘In doing so, however, the Kremlin is overlooking another, more obvious reason for Germany’s policies. The truth, according to Editor-in-Chief Lukyanov, is that the current German-Russian antagonism is based on the rationale of European unification. The decisive event, he argues, was not Navalny’s case, but Brexit.
With Britain’s departure, he says, Germany has had to take responsibility for Europe. "And in that context, it became clear that Russia just wasn't that important anymore. The relationship with Russia has many aspects, good and bad, but they have nothing to do with the central task: building or perfecting a new EU." Russia has simply slipped down the list of German priorities, according to Lukyanov. Kortunov proffers a similar view: "Russian leadership has never quite realized how important the task of European unification is to Germany. If they had understood, they would have behaved differently.”’

‘Berlin's handling of Nord Stream 2 will now be an indicator for Moscow of how much independence Germany allows itself. Either way, the Kremlin has likely scaled back its own hopes for the project. "Gas pipelines no longer play the strategic role they had in the 1970s. Back then, they ensured peace and stability. Today, it is more the other way around," believes journalist Lukyanov.
And there is plenty of fodder for disputes that go beyond Nord Stream 2. There’s Moscow’s handling of the protests against dictator Alexander Lukashenko in Belarus, the court ruling in the Khangoshvili murder case expected in March, the faltering implementation of the Minsk Agreement in eastern Ukraine, the question of how Russian hacker attacks should be addressed and Russia’s actions in Syria.
Prospects for the more distant future are entirely uncertain. "A generational change is underway within the political elite in Germany, and politicians are coming to the fore who no longer believe that Germany owes Russia anything. For them, the world war and even reunification are distant history,” says think tank man Kortunov. The German-Russian reconciliation that took place after the war, which was anything but a matter of course, will continue to fade in memory.’

Germany’s political elite understands rightly that China at the moment is more important than Russia.

And by the way, to separate good and bad relationships so you can have these two relationships at the same time is not only the secret of any lasting marriage, it’s also the essence of what’s called diplomacy.