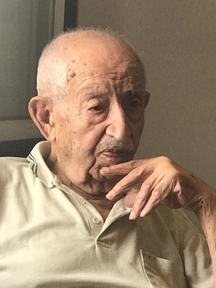 On a modest spy – a friend sent me this article in The Times:

‘He was born Zaki Shasho in the Syrian city of Aleppo in 1924. His father was a primary school janitor, one of a 10,000-strong Jewish community that had existed in Aleppo for more than two millennia. Some were wealthy merchants but most, like Shoshan’s family, were poor and supported by Jewish charitable institutions.
Short and bespectacled, he was brought up among Muslims in the Ancient City and Arabic was his mother tongue. In the late 1930s, as hostility towards Jews grew throughout the Arab world, a teacher named Monsieur Pedro arrived to teach Hebrew at his Jewish school, bringing with him stories of the Zionist movement in Palestine.
“We understood that what we read about in the Bible [the land of Israel] really existed. It wasn’t in Heaven,” Shoshan told Matti Friedman, author of Spies of No Country: Secret Lives at the Birth of Israel, towards the end of his life.
In 1942, aged 18, he and a friend resolved to reach it and were smuggled across the border. There he joined other Syrian emigrants in a kibbutz near the town of Rehovot where they worked in the fields. Most of the early Jewish settlers were from Europe, and regarded Arab Jews with disdain and suspicion, but as Arabic speakers Shoshan and his peers possessed an invaluable skill. They “discovered that their ticket into their new society was to become the people they had fled”, Friedman wrote.’

‘In the spring of 1948, as British forces were withdrawing from Palestine, Shoshan and a colleague were ordered to join thousands of Palestinian Arabs fleeing from Haifa to Lebanon to escape warfare in their homeland and establish themselves in Beirut. The difference between life and death could be “an incorrect verb”, Friedman said.
Shoshan, then 24, used the cover name Abdul Karim Muhammad Sidki. He and his colleague opened a kiosk and ran a rudimentary taxi service while sending intelligence back to Tel Aviv through radio transmissions.
On one occasion they helped an explosives expert to blow up a luxury yacht that had once belonged to Hitler and was moored off Beirut. His bosses feared the Aviso Grille would be used as an improvised gunboat to attack Haifa.
On another, Shoshan met an old Palestinian man who lamented the loss of his sons in the attack on the Haifa garage that he had carried out. “Before that I had never thought about the people who were killed there,” he said decades later.’

‘He married a fellow Syrian-born intelligence operator, Yaffa, with whom he had two children: Jacob, a tour guide, and Eti, who teaches inmates in Israeli prisons. After Yaffa died in 1970 he married Rachel, another Jewish escapee from Aleppo.
Shoshan continued to work intermittently for the Israeli intelligence agency Mossad, training new agents and occasionally vanishing on mysterious assignments, doubtless playing the part of an old Arab man to glean intelligence in a hostile country.
Shoshan respected the Arabs among whom he had grown up. His son said he always voted for left-of-centre parties that favoured peace with Israel’s Arab neighbours, and supported the principle of a two-state solution.
A modest, self-effacing man, he lived in a small flat in a Tel Aviv suburb, taking pleasure in the blossoming career of his one grandchild, Yaffa, a classical musician.’

There are a few things that struck me in this article.
The difference between life and death could be an incorrect verb, not really surprising, but still. What does it take to blend in?

And the mysterious assignments for an old man, made me smile.

Maybe this is another route to happiness.

Give yourself a mysterious assignment.
You are your own secret service.