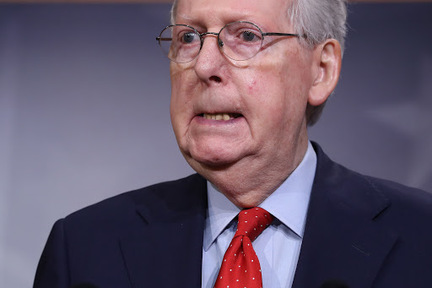 On Machiavellianism – Jane Mayer in The New Yorker:

‘On the afternoon of January 6th, less than an hour before a violent mob supporting President Donald Trump broke into the Capitol, causing mayhem that led to the deaths of five Americans, Mitch McConnell, the Senate Majority Leader, gave the most powerful speech of his life. In a cold disavowal of Trump’s false claims about rampant election fraud, McConnell, a Republican from Kentucky, stood behind the Senate dais and stated the obvious: despite two months of increasingly malign lies from Trump, and from many of his supporters in Congress, Joe Biden had won the Presidency. McConnell, in his dead-eyed, laconic manner, listed the damning facts, citing numerous federal judges and state officials who had rejected Trump’s baseless assertions that the election had been “rigged” against him. “The voters, the courts, and the states have all spoken,” McConnell said. “If we overrule them, it would damage our republic forever.” Then, in a final jab, he pointed out that—contrary to Trump’s ludicrous claim that he’d won a second term by a landslide—the election “actually was not unusually close.” Trump had lost by seven million votes in the popular ballot, and 306–232 in the Electoral College.
In the days after the Capitol attack, as horrifying footage emerged of marauders ransacking the building and chanting, “Hang Mike Pence!” and “Treason!,” McConnell, through a series of anonymously sourced reports in major news outlets, distanced himself even further from the President. As a prominent Republican strategist noted, “Nothing’s ever happenstance with McConnell”—and so each report was taken as a Delphic signal.’

(…)
‘Adam Jentleson, a former top Democratic Senate aide and the author of “Kill Switch,” a new book about the Senate, said, of McConnell, “He should be deservedly held accountable for spending more than a month giving credence to Trump’s claims of election fraud—on the Senate floor.” Jentleson added that McConnell, by failing to speak out earlier, had “offered legitimacy” to Trump’s war on the truth: “Other Republicans took their signals from McConnell and continued to fan the flames. You can blame the rioters, but the entire Republican Party was telling them their claims were legitimate.”’

‘Still, given Trump’s continuing popularity among Republicans, many people in Washington were surprised that McConnell—who is by far the most powerful, and often the most inscrutable, member of the Party in Congress—was willing to openly revolt against him. But John Yarmuth, a Democratic representative from Louisville, Kentucky, who has known McConnell since the late sixties, told me he’d long predicted that the alliance between Trump and McConnell would end once the President could no longer help McConnell. “Three years ago, I said he’d wait until Trump was an existential threat to the Party, and then cut him loose,” Yarmuth said. “He’s been furious with Trump for a long time. Many who know him have talked with him about how much he hates Trump.” But, Yarmuth noted, McConnell, focussed on Republican judicial appointments, “made a Faustian deal for all those judges.” Since 2017, McConnell has played an oversized role in helping Trump install more than two hundred conservative federal judges, including three Supreme Court Justices.’

‘As it turned out, the Republican leadership’s complicity with Trump was not only cynical; it also may have been an egregious miscalculation, given that voter data suggests his unchecked behavior likely cost the Republican Party the two Georgia seats. The chaos and the intra-party warfare in the state appear to have led large numbers of moderate Republican voters in the suburbs to either vote Democratic or not vote at all. And in some deeply conservative pockets of Georgia where the President held rallies, such as the Dalton area, Republican turnout was unexpectedly low, likely because Trump had undermined his supporters’ faith in the integrity of American elections.’

‘ After the January 6th insurrection, dozens of the largest corporate campaign donors, including A.T. & T., Comcast, and Honeywell, used their cash to send a message: their political action committees would no longer contribute to the hundred and forty-seven Republican representatives and senators who had opposed certification of the Presidential election even after the Capitol riot, on the spurious ground that the process had been less than fair. Even Koch Industries, the huge oil-refining conglomerate that has served as the conservative movement’s piggy bank for decades, said that it was reëvaluating its political contributions. McConnell, who once infamously declared that the three most important ingredients for political success in America are “money,” “money,” and “money,” was reportedly alarmed.’

‘Christopher Browning, a historian of the Holocaust and Nazi Germany, told me that McConnell has been almost “Houdini-like at escaping his own devil’s pact” with Trump. In a widely admired essay in The New York Review of Books, from 2018, Browning called McConnell “the gravedigger of American democracy,” and likened him to elected officials in Weimar Germany who struck early deals with Hitler, mistakenly believing that they could contain him and his followers. When I asked Browning if he still regarded McConnell in this way, he said that the new Minority Leader had “cut a better deal than most.” McConnell was “lucky that Trump was so lazy, feckless, and undisciplined.” Hitler didn’t go golfing, Browning pointed out. But Browning found little to celebrate in McConnell’s performance. “If Trump had won the election, Mitch would not be jumping ship,” he noted. “But the fact is Trump lost, and his coup failed. And that opened an escape hatch for Mitch.” Browning warned, however, that “the McConnell wing was ready to embrace Trump’s usurping of democracy—if Trump could pull it off.”’

It’s still possible that the Republican party will split in two but McConnell’s talents should not be underestimated.
He is a man, who has no soul, and is still capable of selling it. Truly Faustian.