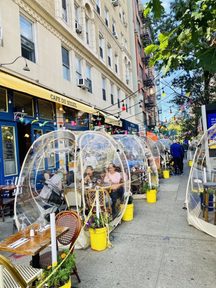 On brunch and other meals – Corina Knoll in NYT:

‘New York City, emptied of its tourists and foot traffic, can seem an especially barren place during the pandemic. The onset of winter’s chill has limited outdoor escapes, making quarantine feel even more cruel, particularly during those long stretches when there is only icy wind and no snow to soften the landscape.

But there is life along the streets still: the die-hards who brave outdoor dining even when the temperature falls below freezing and a patio heater cannot shield them from a January breeze. Even at night, when the few degrees donated by the sun disappear, people arrive to shiver through dinner with numb fingers and toes.
Outdoor dining was that summer boost that gave restaurants and their customers hope, but it was never clear what would happen when the weather turned. Now the answer can be seen in those dedicated to sallying onward through the frostiest of days.
It is not what it was, but outdoor dining has managed to survive, with loyal patrons determined to save a restaurant, and friends who insist on finding a safe way to meet up. Restaurants have rallied to show their pluck, cranking up heaters, setting out fresh flowers, decking tables with cheery linens, stringing lights around sidewalk booths even as the city’s upcoming restaurant week is reimagined for takeout and delivery.’

‘Still, New Yorkers want to get out. In Crown Heights, Brooklyn, Maria Myrtil scouted out Sweet Brooklyn Bar & Grill to see if it had safety protocols in place before making a reservation on Sunday to sit with friends inside a small plastic enclosure resembling a tiny greenhouse.’

‘At Hi-Life, a restaurant and bar on the Upper West Side, black tables sat empty as the lunch hour began. Still, the owner, Earl Geer, remained optimistic.
“It’s about doing the best you can,” Mr. Geer, 63, said, sitting outside in a booth under his restaurant’s vintage neon sign. “It’s showing up with your best every day and putting one foot in front of the other, and in the end, that spirit will prevail.” Mr. Geer opened the place three decades ago, inspired by the Art Deco lounges of the 1930s. He takes pride in the fact that his establishment has never closed — not on Sept. 11, not during the blackout of 2003 and not during Hurricane Sandy. He credits his employees and family members for carrying the restaurant through a string of rough patches, including the Great Recession, although nothing has been quite like the pandemic, which Mr. Geer described as “a new adventure in survival.” But even the onset of winter has not shaken his hope in customers who seem to recognize their role in keeping a business afloat.
“Most of the time they’re New Yorkers looking to meet us halfway,” he said. “We’re going to survive it.”’

I’m one of the die-hards. Your feet might suffer a bit, but then there is Café du Soleil, where you sit in something that resembles a plastic igloo, and you can easily survive for two hours.

Yes, there are the tiny or not so tiny greenhouses where the protection against the cold is merely an illusion, but who cares. After this, indoor dining seems so bourgeois and mundane, something for octogenarians with a bladder infection. I do miss a nice cocktail bar now and then, but on the other hand I appreciate the fact that I get home more or less sober, so I can read a decent novel.