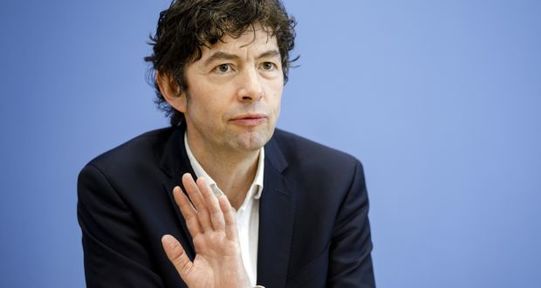 ‘Drosten: One of the mutations in the Brazilian and South African variants has already demonstrated a serious immune escape ...
DER SPIEGEL: ... which helps the virus evade our immune defenses. Does that mean that the vaccines will be ineffective? Drosten: Antibodies are just one component of immune protection, another is T-cell immunity. That protects much more strongly against a serious progression of the illness. If the virus mutates, it doesn't have an effect on T-cell immunity. As such, I don't think that we have to fear that our vaccines will be ineffective.
DER SPIEGEL: When you formulate such assessments, people across Germany are listening, and it often determines public opinion. How well are you able to live with that responsibility? Drosten: It doesn't rob me of sleep. From the very beginning, I hoped that this public role would be shared among several people. And luckily, that is happening.
DER SPIEGEL: Last year, experts who have argued time and again against scientifically proven measures – e.g. Jonas Schmidt-Chanasit and Hendrik Streeck – likely did more damage than corona-truthers. Protecting high-risk groups must have priority, you frequently heard from their group. Yet it has long-since been clear that doing so is impossible when case numbers are high. At what point do you lose your patience? Drosten: Are you trying to get me to criticize colleagues by name? I don't think much of personal attacks.
DER SPIEGEL: We are more interested in a fundamental point. Many such experts awaken the impression that only opinions are important in science, and not evidence. That undermines the credibility of researchers who take a more serious approach. How do you deal with that? Drosten: Like most scientists, I try to convince people with facts. Imagine, for a moment, that a completely new dataset emerges that is so compelling that it knocks you off your feet and you think: Finally, everything is clear! I'll summarize it and explain it in an interview or share it via Twitter. By doing that, I can explain the facts or clear things up.
DER SPIEGEL: And that's how you hope to explain to us how serious science works? Drosten: It could be that this strategy is a bit short-sighted, or perhaps naïve ...
DER SPIEGEL: ... and perhaps simply won't be understood.
Drosten: Maybe that as well. Perhaps, though, it is more your job as journalists to make it clear what makes one study more credible than another? DER SPIEGEL: By not contradicting people who say ridiculous things publicly, you tolerate a situation whereby people believe in false prophets. It's particularly problematic with corona-truthers, who claim that mortality isn't much higher than it is with influenza.
Drosten: Let me be extremely clear about that: According to what I have heard, the infection mortality rate in Germany – meaning the percent of SARS-CoV-2 infections that result in death in Germany – is likely over 1.1 percent. That is more than 10 times higher than the flu. But I know what you mean, of course. Though studies that are out of date, that are no longer accurate, don't bother me so much. That's just part of science. What bothers me more are arguments made without evidence, without substance, with unfair analogical reasoning. All those things that are essentially akin to suppressing scientific insights. It results in a false balance, with people getting the impression that such arguments are also science.
DER SPIEGEL: Politicians also get sucked in by such assertions.
Drosten: Of course. How is a politician supposed to know who the real experts are? Since fall, when some of these experts sounded the all-clear, I have had the feeling that we have been subject to a false balance. My assessments are now almost always contrasted with opposing views that are not rooted in fact. But I simply don't have the time to fight on this front. I already have a fulltime job as the leader of an institution, where I carry responsibility for research, for patient care and for public health.’

Interestingly enough, the word paranoia has not been used in this interview, which says a lot about the prudence of both the interviewers and the interviewee.

I’ve always defended to right to fancy yourself as a virologist, even though your knowledge of virology is close to zero.

In a democracy you cannot say: only expert opinions are allowed. Sooner or later, only experts will be allowed to vote, the tyranny of reason will be awful as well.

But the threat of the tyranny of paranoia is growing bigger, unfortunately.

Reasonable people can disagree about measurements taken by local and federal authorities. And also during a pandemic, civil liberties are worth defending.

But as Mr. Drosten subtly is suggesting the war against disinformation and blatant lies might be lost already.
Even in the shining city on the hill, Merkel’s Germany.