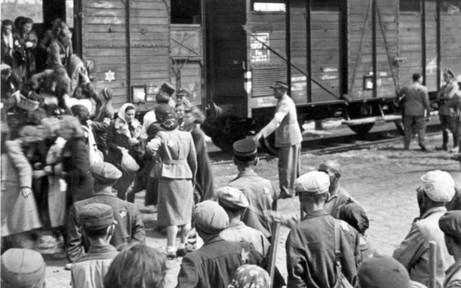 On the fear of history – Ofer Aderet in Haaretz:

‘The night before the ghetto’s destruction, Estera Siemiatycka fled with her toddler son, as well as with her sister and her sister’s daughters.
Initially, they found refuge with a Polish acquaintance and then fled into the forest. According to Siemiatycka’s testimony, one day when she set out to find food, Polish farmers raided their hiding place, arrested Siemiatycka’s sister and the children and turned them in to the Germans. All of them were shot to death. Despite the tribulations that Siemiatycka suffered after that, she survived the war.
She fled to a nearby village and begged the village mayor, Edward Malinowski, to save her life. According to her account, he agreed to help her but at the same time, he stole property from her – half of her money as well as the sweater she was wearing. As they had agreed upon in advance, the mayor took her to the Germans and declared that she was a non-Jewish Polish woman who had fled a labor camp. In so doing, he saved her life. Siemiatycka was sent to do forced labor in Germany and survived the war.

While back in the village, on leave from the labor camp, she said that she heard that the village mayor had turned in 18 other Jews to the Germans. According to what she had heard, he set out into the forest with the Germans along with another man and showed them where several Jews were hiding.
Is it possible that the man who saved her was also an accessory to the murder of other Jews? Anyone sufficiently familiar with accounts from the Holocaust knows that anything is possible.’

‘So what’s the connection between a Holocaust survivor from a former border town and a trial that has made headlines nearly 80 years later? That’s where research conducted by Engelking and Grabowski and published in their two-volume book in Polish, “Night Without End: The Fate of Jews in Selected Counties of Occupied Poland,” enters the picture. The book describes the murders of thousands of Jews with the wide-ranging involvement of Poles.
One page of the book includes a highly abbreviated summary of Estera’s story. It states that she was saved by a Polish village mayor who robbed her and turned other Jews in to the Germans. It’s a complicated story that defies easy definitions of good and bad, but it’s a story of increasing complexity the more one delves into it – and not only because two people in the village had the same name as the mayor. There are several conflicting versions of the entire story and it’s ultimately difficult to get a complete picture of what happened on the ground.
That is precisely when thorough, serious, responsible historic research comes into play, the kind carried out by experienced researchers who know how to deal with a range of sources and who, based on their evaluation of them, can develop an assessment that is closest to the truth. At this point, it is also worth noting the obvious. No historian, or any other professional, is immune from making mistakes.’

‘When Filomena Leszczynska, the mayor’s niece, discovered that her uncle was being accused in the book of being an accomplice to the murder of Jews – a very serious stain on one’s reputation in contemporary Poland, where tribute is paid to Poles who saved Jews during the war – she refused to remain silent.
With the help of the Polish League against Defamation, which receives funding from the Polish government, she filed her libel suit against Grabowski and Engelking, the two editors of the book. She claimed that they deliberately ignored the fact that her uncle had been acquitted at the trial in Poland after the war, in part based on the testimony of Jewish Holocaust survivors including Estera.
Her uncle suffered an indescribable injustice, Leszczynska claimed. Instead of being recognized as a righteous gentile or at least a national hero, he was being unjustly vilified as an accomplice to the murder of Jews. In the process, his reputation was being besmirched – along with the good name of the entire Polish nation.
The Warsaw court, which issued its verdict in the case this week, didn’t go so far as to resort to abstract terms such as the nation’s “good name.” It preferred to deal with narrative of the story itself. The judge was convinced that the allegation that the mayor betrayed Jews to the Germans was mistaken and ruled that the account of that in the book did in fact harm his good name. The court ordered the historians to apologize and correct the book.
The bottom line is that the court found that the testimony that a Holocaust survivor gave decades after the war was not credible, preferring to believe her testimony at the mayor’s trial immediately following the war, in which he was acquitted.
But the story is far from over. Engelking is in possession of testimony that witnesses who had sought to testify against the mayor at the trial were beaten and threatened not to do so. According to one of the accounts, the mayor found the hiding place of the Jews, lied to them, claiming that nothing bad would happen to them and in the process, helped to Germans capture them.
In addition, in Estera’s later testimony, she admitted that she had not told the truth at the mayor’s trial, explaining that she had been afraid that he would be sentenced to death. She wished to spare his life “despite the fact that he did a lot to hurt me.”’

‘Engelking and Grabowski have already announced that they will appeal the Warsaw court’s decision, so it appears that this saga will be with us for quite some time yet. It presents a challenge not only to the very sensitive relations between Poles and Jews but also the role of the historian as a whole. Can a historian serve as “judge,” and if so, when and under what circumstances? And when can a judge become a historian? And if the story itself were not sufficiently complicated, the outward setting – what’s happening here and now in 2021 – only exacerbates the tension. In recent years in Poland, a bitter battle has been fought over the historic “truth.” The right-wing Polish government has claimed that the “type” of Polish researchers such as Grabowski, Engelking and Jan Tomasz Gross have for years tried to tarnish their homeland’s past and present it as a nation of criminals who collaborated with the Nazis.
In the process, it is claimed, the stories of heroism and rescue by Poles who risked their lives to assist their Jewish neighbors have been cast aside. In addition, many stories of suffering by the Poles, who themselves suffered terror, persecution and death at the hands of the Nazis, have been excluded from the history books.
But in the battle for the narrative and the search for the “truth,” the Polish government and its proxies in the media and in organizations and other entities, have lost their bearings. The height of the absurdity came in 2018, with the attempt to impose a prison term on those claiming that the Polish nation was involved in the Nazi crimes. But even after that was no longer on the table – due to international pressure – other threats against historians and journalists dealing with this sensitive field remain in place.
Just last week, the Warsaw police questioned a Polish journalist who had written that Poles participated in the Holocaust. The legal provision that provided the basis for her interrogation had nothing to do with the Holocaust. It deals instead with inflicting harm to Poland’s good name.’

‘There is one solution for this. Removing the politicians and the courts from the historical debate. Instead, a scientific panel can be established to clarify exceptional cases, such as that of Estera and the mayor, and if it turns out that he was defamed – after a meticulous examination by historians of the historical sources – the research should be corrected. It would also be possible to apologize if a mistake has been made. But this cannot happen in a courtroom, a police station or parliament.’

Enough but perhaps not enough has been said about the absurdities of the current Polish government when it comes to interfering with the work of historians.

Only a government that is afraid of history and truth can turn to such draconian measures as to make it a misdemeanor when you claim ‘that the Polish nation was involved in the Nazi crimes.’

You have to be very uncertain of your own history that you need the state monopoly on violence i.e. the legal system to keep your records clean.

There is not even any pretense that the current Polish government cares about free speech, of course many of the rightwing movements in Europe care only about free speech they like, and sadly the left is not immune to this tendency and has never been immune to it.

As Aderet emphasizes, also historians make mistakes, but accusers of libel should only in the rarest occasions be able to get a hearing in court.

If not, we enter the absolute undesirable situation that the state decides what history is and what not and from there it is not far to the Ministry of Truth.