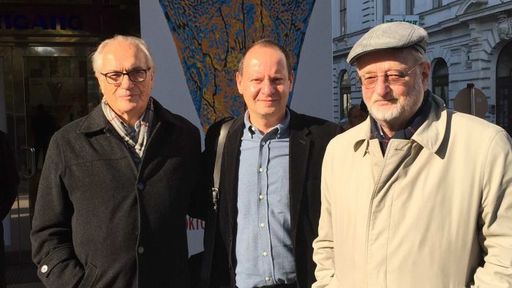 On Christmas cards and the past – Philippe Sands in The New Yorker:

‘In early January, a man born in the small Austrian village of Thal appeared in an eight-minute video, delivering a powerful statement on the storming of the U.S. Capitol. One thing leads to the next, he warned, emphasizing that he spoke from experience: “I grew up in Austria.” Arnold Schwarzenegger’s defense of democracy and its institutions, assisted by his sword from “Conan the Barbarian” and a cinematic score, drew a parallel with the events of Kristallnacht, the Night of Broken Glass, in November, 1938, when mobs attacked Jews across the Reich, from Berlin to Vienna. The video was viewed by tens of millions around the world, but several Austrian acquaintances of mine noted that it got less play in their country than in others.
Schwarzenegger spoke personally, evoking a youth spent in the company of “broken men drinking away their guilt over their participation in the most evil regime in history.” They were ordinary folk, he suggested, not necessarily rabidly anti-Semitic or Nazi, who “just went along.” “I’ve never shared this so publicly, because it is a painful memory,” he continued, introducing us to his own drunken, violent father—a man like so many in the neighborhood.’

‘On Christmas Day, 2020, I received an e-mail from Vienna. The correspondent introduced herself as Marie-Theres Arnbom, a historian and the great-granddaughter of Robert Winterstein, in whose house she lived, in the parish of Pötzleinsdorf, on the outskirts of the city. A renowned lawyer, Winterstein served as Procurator General (chief public prosecutor) of Austria until March, 1938, when, following the Nazi takeover and the country’s incorporation into the Third Reich, he was fired, stripped of his pension, arrested (on Kristallnacht), and deported to Buchenwald, from where he never returned. His family retained a memento of his removal, a typewritten letter, dated September 14, 1938, closed with a confident but indecipherable signature. For decades, the family wondered about the identity of the writer.
Eighty years later, the mystery was solved, Arnbom wrote, thanks to my book, “The Ratline.” Recently published in German, and gifted to her at Christmas, the book mentioned her great-grandfather, one of the at least 16,200 Austrian civil servants removed from their posts for the wrong of being Jewish. The Säuberungsaktion, or cleansing action, was implemented by the book’s central character, Otto Wächter, an Austrian lawyer, Nazi, and S.S. member. He fled Vienna for Berlin after leading the failed July Putsch of 1934 against Chancellor Engelbert Dollfuss’s government, only to return four years later, in triumph, to be appointed state secretary. It was his signature, I confirmed in my book, that graced the unhappy family heirloom.’

The visit to L’viv prompted more research and, eventually, an introduction to Horst, the fourth of Otto and Charlotte Wächter’s six children. Otto was never tried or convicted, Horst liked to tell me, which meant that on his death Otto was to be considered an innocent man. That fact created a space, which came to be occupied by the silence of the family, one that allowed painful facts to be avoided, the truth to be bypassed, and reckonings put off. In due course, Horst and I made a BBC documentary, and I wrote a book, “East West Street,” in which Horst and his father were minor characters. At my suggestion, he deposited copies of the letters, diaries, and papers of his parents with the Holocaust Memorial Museum, in Washington, D.C., and offered me a full set, just short of nine thousand pages of love and horror on a single USB drive. “To prove I am not a Nazi,” he explained with a grin. The rich, dark material became the basis for a podcast series (with Stephen Fry as the voice of Otto, and Laura Linney that of Charlotte) and a second book, “The Ratline,” which lifted the lid on top of the Nazi couple’s life, and brought the introduction to Arnbom and many others like her.
These works have catalyzed an outpouring of communications that I had not expected, with many from the children and grandchildren of Nazi perpetrators, victims, and bystanders. Such readers, it turns out, are especially attentive to points of detail, and are often prompted to reach out to the author of a book by the mention of a family member or a notorious location or character. In this way, since 2016, I have received about thirty communications a month, more than a thousand in all. Over the years, I have acquired newly discovered family members (in Los Angeles), and received a myriad assortment of astonishing personal tales. There is the son of the U.S. Army man named Lucid who hunted Wächter and arrested Himmler’s wife and daughter, helping himself to the Führer’s Christmas cards to the Himmlers; the cards, with Hitler’s impenetrably telling signature, now reside in a quiet bungalow in Albuquerque. Or the Catholic priest from Kansas City, who sent a reminiscence about the summer of 1969, when he lodged with the Baroness, as Wächter’s widow styled herself, at Haus Wartenberg, her guesthouse in Salzburg, unaware that she had illicitly buried her husband in the garden. Or the ninety-two-year-old former S.S. man who went on the run with Wächter, describing how the pair followed the famous Nuremberg trial from a hiding place high in the Austrian mountains—“where the British and Americans were mostly too lazy to go up into the mountains,” he added, with a grin.
Charlotte spent her final years scrubbing her husband’s name out of the public domain, challenging broadcasters and others who aired calumnies about him. “I do not want my children to believe that he is a war criminal who murdered hundreds of Jews,” she told a journalist, in 1977. The truth about Otto Wächter disappeared into the shadows, until Horst shared the family archive. His motivation is uncertain, although it seems to be driven by instincts of openness and denial, a strange combination that nevertheless allows him to sleep in proximity of a portrait of his godfather, Arthur Seyss Inquart, the first (and brief) Chancellor of Nazi Austria, who went on to rule the Netherlands for five years and was hanged at Nuremberg for crimes against humanity. Horst, whom I’ve found to be gentle and prone to be economical with uncomfortable facts and is no anti-Semite or Holocaust denier, professes a filial duty to find the good in his father. His efforts have not endeared him to the family, an extensive and diverse clan that encompasses lawyers and hoteliers, several with a deep Catholic faith, and one convert to Islam. Charlotte and Otto’s children have produced twenty-three living grandchildren, and most, it seems, prefer to keep the grandfather out of the limelight. This imposes a significant burden.
One grandson, Horst told me, worried that my writings could cause difficulties with the Jewish partners at his law firm’s office in New York. That grandson’s wife whispered an inquiry: Could I prevent the fruits of my research from being disseminated in Austria? No, I replied, but why? “To protect our child.” Another grandson asked whether I could show mercy on his grandfather and express forgiveness, on behalf of the family, for his actions, and maybe also write a different kind of book? And, in late January, on International Holocaust Remembrance Day, a granddaughter alerted me to a personal message she had posted on YouTube, on silence and learning the truth of her grandparents’ past, “how I have learned the facts of it, and how I have learned to deal with it.”’

Recently I watched the documentary ‘What Our Fathers Did: A Nazi Legacy” directed by David Evans, written by among others Philippe Sands, he stars in it as well.

Part of what Sands is writing about in this article can be seen in this documentary, and the interesting thing is – at least it was interesting to me – that the longer the film lasted the more sympathy I felt for Horst von Wächter, who is not is a straightforward Holocaust denialist, but who is clearly not willing to accept the truth about his father.

The burden on the children and the grandchildren of the perpetrators of the Holocaust is immense, that was what the documentary once again made clear. But the attempts by Mr. Sands to confront Horst von Wächter with the past of this father were rather clumsy and sometimes even haughty. Instead of feeling for the people, the characters, in this documentary I started wondering why they had agreed to participate, what were they looking for, what were they thinking? Sometimes the wages of guilt is just vanity.

(The video by Mr. Schwarzenegger on the storming of the Capitol was equally vain and more than that, slightly unbearable.)

The most interesting thing to me in this article was the link to a video of one of the granddaughters of Von Wächter posted on youtube.

You can watch it here.

This video tells me at least as much, maybe more about the burden of the past than the article by Mr. Sands.