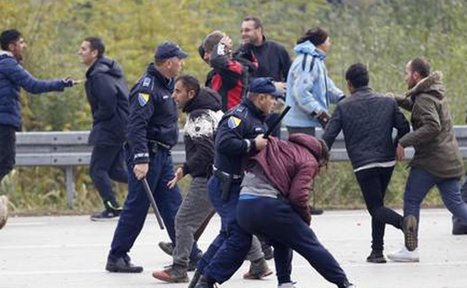 On the game – Sonja Peteranderl in Der Spiegel:

‘Croatian border police "have used force, pummeling people with fists, kicking them, and making them run gauntlets between lines of police officers," according to a Human Rights Watch report on the systematic human rights violations. "Violence has been directed against women and children," the report continues. The report notes that migrants who are intercepted by border guards are not returned to areas near border crossings, but to remote regions, and they are "at times forced to cross freezing streams."
Human rights organizations around the world have been criticizing the illegal returns – so-called "pushbacks" – for years. Currently, officials with the European Union border protection agency Frontex are under investigation in connection with such pushbacks. Nevertheless, the controversial practice continues, thus denying migrants the possibility of submitting asylum applications in the EU.’

‘The IOM estimates that there are currently between 9,000 and 10,000 migrants in Bosnia-Herzegovina, with around 3,000 people camping out in below-zero temperatures with no water or electricity in vacant homes and factory buildings, in tents or in the forest.
It isn't a pleasant place to stay, so people desperately continue trying to cross the border. The Italian photographer Alessio Mamo accompanied families from Afghanistan, with babies and small children, in their attempts to get into Europe.’

Read the article (and take a look at the pictures) here.

It’s good that Der Spiegel keeps reporting about this, the widespread anti-immigrant sentiment in Europe is one explanation for the sheepish behavior of European politicians who let this wound fester.

According to a report from a Danish NGO most of the people who were illegally pushed back came from Afghanistan, Pakistan and Bangladesh.

It’s hard to miss the irony, after spending billions of euros on a hapless war in Afghanistan the EU is responsible for physical violence against Afghan children and their parents at its borders. Officially in order to solve the refugee crisis.

This is not an issue with which you win elections, so almost no politician is talking about it.

The pious talk about human rights ends in a ‘game’ played by Croatian border police against the truly powerless.