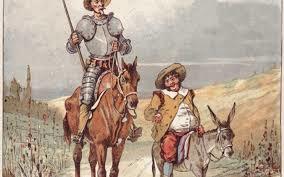 On all the possibilities – Joshua Rothman in The New Yorker:

(A friend started a conversation about this piece…)

‘ liked this entrepreneurial existence—its ambition, its scrappy, near-future velocity. I thought I might move to San Francisco and work in tech. I saw a path, an opening into life. But, as the dot-com bubble burst, our client’s business was acquired by a firm that was acquired by another firm that didn’t want what we’d made. Our invoices went unpaid. It was senior year—a fork in the road. We closed our business and moved out of the office. A few days before graduation, when I went to pay my tuition bill, a girl on the elevator struck up a conversation, then got off at her floor; on my ride down, she stepped on for a second time, and our conversation continued. We started dating, then went to graduate school in English together. We got married, I became a journalist, and we had a son. I now have a life, a world, a story. I’m me, not him—whoever he might have turned out to be.
“The thought that I might have become someone else is so bland that dwelling on it sometimes seems fatuous,” the literary scholar Andrew H. Miller writes, in “On Not Being Someone Else: Tales of Our Unled Lives” (Harvard). Still, phrased the right way, the thought has an insistent, uncanny magnetism. Miller’s book is, among other things, a compendium of expressions of wonder over what might have been.’

‘“While growth realizes, it narrows,” Miller writes. “Plural possibilities simmer down.” This is painful, but it’s an odd kind of pain—hypothetical, paradoxical. Even as we regret who we haven’t become, we value who we are. We seem to find meaning in what’s never happened. Our self-portraits use a lot of negative space.’

‘Among secular people, the absence of an afterlife raises the stakes. In “Missing Out: In Praise of the Unlived Life,” the psychologist Adam Phillips warns that “once the next life—the better life, the fuller life—has to be in this one, we have a considerable task on our hands.” Given just a single shot at existence, we owe it to ourselves to hit the mark; we must not just survive but thrive. It’s no wonder that for many of us “the story of our lives becomes the story of the lives we were prevented from living.”’

‘A whole art form—the novel—has been dedicated to exploring this dynamic. Novelists often show us people who, trapped by circumstances, struggle to live their “real” lives. Such a struggle can be Escher-like; a “real” life is one in which a person no longer yearns to find herself, and yet the work of finding oneself is itself a source of meaning. In Tolstoy’s “Anna Karenina,” Anna, caught in a boring marriage, destroys her life in an attempt to build a more passionate, authentic one with Count Vronsky. All the while, Levin, the novel’s other hero, is so confused about how to live that he longs for the kind of boring, automatic life that Anna left behind. Part of the work of being a modern person seems to be dreaming of alternate lives in which you don’t have to dream of alternate lives. We long to stop longing, but we also wring purpose from that desire.’

‘Like facets in a jewel, such moments seem to put our lives into prismatic relief. They make us feel the precariousness and the specificity of the way things are. In “The Post-Birthday World,” Lionel Shriver builds a whole novel around this conceit: its chapters alternate between two time lines, one in which Irina, its protagonist, didn’t kiss her husband’s friend, and another in which she did. (In the first time line, she often thinks back on the moment of the almost-kiss—an instant when her happy life hung in the balance.) The same essential premise animates countless popular narratives, from rom-coms like “Sliding Doors” to sci-fi series like “Devs.” And yet the premise is irrational: in truth, our lives have infinite facets, and, for any given outcome, the turning points we isolate are necessary but not sufficient.’

‘We all dwell in the here and now; we all have actual selves, actual lives. But what are they? Selves and lives have penumbras and possibilities—that’s what’s unique about them. They are always changing, and so are always new; they refuse to stand still. We live in anticipation of their meaning, which will inevitably exceed what can be known or said. Much must be left unsaid, unseen, unlived.’

The novel itself, as Rothman remarks, is built on the premise of grass being greener somewhere else.
He mentions ‘Anna Karenina’, he could have mentioned Bovary or Don Quixote, because it’s not only women who happen to be escape artists. If that’s the right word, escape artists.
The older you get the less possibilities. Yes and no. Of course, a father of four young children probably has more responsibilities than a teenager. He will look back and think, how many sorrows I have now, how less sorrows I had then. Even though, in reality his teenage years might have been troubled and dark. The responsibility is always also an excuse.

I’m not sure if we longed to stop longing, perhaps we must distinguish between the unwanted and slightly dangerous longings (have a lover, become the best knight) and longings that are completely acceptable (be a good father) – art still is the place where we go to in order meet the unwanted desires, the unacceptable longings.
The novel, maybe more than so other arts, gives us the possibility to examine unlived lives without endangering ourselves too much, this is both true for reader and writer, for that reason I would like to contradict Adam Phillips. Of course, the pressure to be successful is real, but we have the freedom to get rid of social pressures, or to deal with these pressures ironically, we feign to be successful, we know that our lives are a disaster zone, but we act as if.
And that’s where social comedy kicks in. Built on the gap between the gestures, the pious lies, the make-believe and the true reality behind it.
There may not be a true self, but there’s a true reality. And there are true longings, whether we like these longings or not.