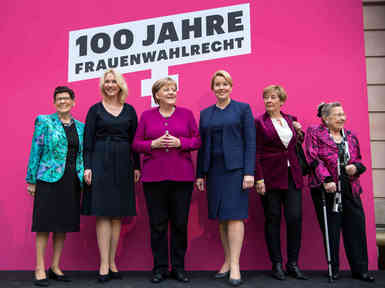 ‘The spectrum of violence against women in the online and offline world is vast. Harassment on the internet, often from the right wing, is aimed at silencing women. They are stalked or exposed, via "revenge porn,” for example, which involves ex-partners posting intimate images of the woman online as a form of retaliation. In relationships, men can become physically abusive, or they exert control by way of apps and spy cams.
Even terror attacks are committed out of misogynist motives, emerging online ahead of time. The mass-murderer Anders Breivik, who slaughtered 77 people in Norway in 2011, discussed his hatred of modern women in his "manifesto.” The terrorists from Halle and Hanau, who launched deadly attacks in 2019 and 2020 respectively, were also adherents of anti-feminist, right-wing extremist ideologies. Their radicalization took place for the most part in front of their computer screens.’

‘Because misogyny is often linked to right-wing extremism, women and girls wearing headscarves are frequently attacked. The number of such offenses has been rising for years, according to the Association of Counseling Centers for Victims of Right-wing, Racist and Anti-Semitic Violence in Germany. Transsexual, intersexual, lesbian and bisexual people have also reported a rise in violence.
On top of that, there is a significant number of unreported cases, since most women who are attacked don’t go to the police. And when they do, misogyny is not recorded separately in the statistics as a motive.
In Berlin, a 47-year-old was recently convicted of beating his girlfriend on at least two occasions. She suffered impaired vision, lacerations and a hematoma.
According to his Facebook page, the perpetrator is fond of motorcycle clubs, the Hertha BSC professional soccer team and the smartphone game Candy Crush, in addition to a strip club and Playboy magazine. His political leanings are also clear: He prefers the right-wing party Alternative for Germany (AfD). And he shares videos that make it clear what he thinks about women’s rights.’

‘he attitudes of people who perpetrate homicide or assault against women are rarely looked into – with only a few exceptions. Journalist Robert Andreasch of Bavaria, for example, has written about the right-wing extremist ideologies of several murderers of women. "The societal background of female homicide is discussed much too rarely,” he says. "Even more rarely does the hatred of women in the neo-Nazi scene receive attention.”’

‘A conservative parliamentarian who requested that we not use her name spoke of "insults like 'whore,’ hopes that she be raped by refugees and threats that a '9 mm’ would be waiting for me in my electoral district.” She says she now does without "obvious signage at the district office” and always ensures that she has male companions when she appears in public. Visitors to her events must register in person and she uses a security service to monitor the entrance.
Ute Vogt of the left-leaning Social Democratic Party (SPD) writes that the abusive messages aren’t even anonymous anymore. "Just recently, I was called a 'filthy refugee whore’ and 'repulsive piece of shit’ by somebody who included their full name and address.” She says she recently discovered abusive graffiti on a power box in front of her house and a stalker also came into her yard.’

‘The toxic atmosphere apparently extends into the Bundestag. Seventy-two percent of the women lawmakers who participated in our survey responded with "yes” to the question as to whether they have experienced misogyny inside parliament from other representatives or staff members. When a woman is speaking, respondents said, it grows noisier in the plenary, with others talking or shouting out interjections more frequently. Women chairing meetings are sometimes not greeted and women lawmakers are addressed on occasion with the informal "du” without being asked. Some say they have been accused of sleeping their way to the top.
Most respondents cast blame on the AfD. In the plenary and even in smaller committee meetings, they say, sexism and anti-feminism have reached new levels since the right-wing party has had representatives in parliament, women lawmakers write. One example mentioned: As Green Party representative Britta Hasselmann was speaking about the disproportionately low number of women in German state parliaments, an AfD lawmaker called out: "natural selection!” Katja Suding, a member of the business-friendly Free Democrats (FDP), says: "From both men and women in the AfD, you can hear insulting comments about the clothes worn by women representatives. Things like: 'What is she planning on doing later?’ or 'She’s looking for attention!'" Another FDP representative, who asked to remain anonymous, writes that she has also experienced men trying to block her path.’

‘One German Incel is called Johannes H. On Facebook, he follows numerous AfD accounts along with the Catholic Rural Youth Movement of Germany. "Still I remain a 27yo virgin for the time being,” he wrote in 2019. He was a member of the Facebook group Incelistan, which had more than 1,700 members and was deleted after DER SPIEGEL spoke with Facebook as part of the reporting for this story. "Fact is that I as a reasonably good looking tall native can’t get a white becky while numerous arabs and negroes can (sic),” he complains in the group (the term "becky" is Incel slang for average-looking women). "German thots LOVE foreign dick (except asian)(sic),” he writes, using Incel slang for "whore." And: "I despise Islam, but they sure know how to treat their 'ladies’ right."
When asked about such posts, H. replied that he has since turned his back on the scene because it is full of "members of ethnic minorities.” He added that he is "of course still a frustrated, horny woman hater.” Politically, he wrote, he is "as far to the right as it is possible to be.” He wrote that he still stands behind his position on Islam because: "You have to persecute sexual minorities, women and especially suppress their proclivity for exhibitionism, and atheism should be treated as a crime. Maybe a califate for Germany wouldn’t be the worst thing.”’

‘Heydrich," as the leading figure of the German cell calls himself – a reference to Reinhard Heydrich, the senior SS officer who was the main architect of the Holocaust – speaks frequently about problems with women. "I should honestly just play the Fritzl card and lock one up in basement (sic),” he wrote to his fellow followers in January 2020. Josef Fritzl is the Austrian man who held his daughter captive in an apartment from 1984 to 2009, and molested her, ultimately siring seven children with her. When "Heydrich” reported to the other members that he found a woman attractive who was an anti-fascist, another commented: "Nice rape target."
In real life, "Heydrich” is 23-year-old Fabian D. of the Ostbayern region of Bavaria. At the beginning of December, a regional court in the Nuremberg-Fürth district sentenced him to two years in prison for preparing a right-wing terrorist attack, though the judgment hasn’t yet been finalized. The court considered it proven that he intended to assemble an assault rifle to kill a large number of people.
(…)

‘Experts warn that, although these may sound like individual radical groups, they threaten to become a danger to society as a whole. "We are seeing signs of radicalization in the manosphere,” says Brazilian computer and communications scientist Manoel Horta Ribeiro, who has led a group of researchers in the most comprehensive attempt yet to analyze the manosphere online. The group looked at 6.7 million posts from six standalone forums and about 22 million posts on Reddit as part of a study released in August.
The researchers found that the sentiment in forums belonging to the older groups was less hateful than that measured in the newer ones. At the same time, even as older groups on Reddit have become less popular and less active, trends like MGTOW and Incels are growing more popular. They are still fringe groups, Horta Ribeiro says, but their potential should not be underestimated. He says it is plausible that the misogynistic and nihilistic debates play a role in turning some users into mass murderers.
The series of killings in which misogynistic motives played a role is alarmingly long.’

‘Overall, 61 percent of those members of the Bundestag who responded to DER SPIEGEL feel that "current social developments are a step backward for women’s positions in society and their freedom.” Some wrote that the crisis brought on by the coronavirus pandemic has further exacerbated the development.
A conservative lawmaker who wishes to remain anonymous says the reports of an increase in sexism and violence against women are "an enormously disturbing development.” Gyde Jensen of the FDP says one indicator is the "worldwide development” of the abortion debate. An alliance of reactionary and arch-conservative governments is increasingly going on the offensive.
Anke Domscheidt-Berg of the Left Party says, "The shift to the right was also accompanied by a step backward in terms of equality.” Agnieszka Brugger of the Green Party sees a "new quality” in the efforts by "reactionary forces to attack and roll back achievements in equality.” Meanwhile, Leni Breymaier of the Social Democrats warns that the situation in Germany could develop the same way it did in Poland. She says the women their have her full solidarity "also because they are involved in a struggle that could just as easily take place here tomorrow.” There is considerable concern about the rise of hatred and violence against women. Across almost the entire political spectrum.’

The killers hate sin and sinners, except their own sins.