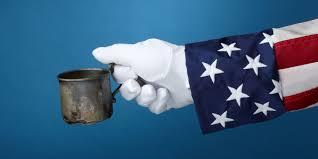 On welfare – Paul Krugman in NYT:

‘Once upon a time there was a program called Aid to Families With Dependent Children — the program people usually had in mind when they talked about “welfare.” It was originally intended to support white widows while they raised their children, and it was effectively denied to both Black and unwed mothers. Over time, however, these restrictions were eroded, and the program rapidly expanded from the early 1960s to the early 1970s.
The program also became hugely unpopular. In part, of course, this reflected the race of many beneficiaries. But many commentators also blamed A.F.D.C. for creating a culture of dependency that was in turn responsible for the growing social ills of inner cities, although later scholarship, notably the work of William Julius Wilson, suggested that the real cause of these ills was the disappearance of urban jobs. (The social problems that have followed economic decline in much of the American heartland seem to confirm Wilson’s thesis.)
In any case, in 1996 Bill Clinton enacted reforms that both drastically reduced aid to the poor and imposed draconian work requirements, even on single mothers. Welfare as we knew it really did end.’

‘A.F.D.C. was intended to provide mothers with enough to get by — barely — while raising their children. In 1970 three-person families on A.F.D.C. received, on average, $194 a month. Adjusting for inflation, that’s the equivalent of around $15,000 a year today, compared with the $6,000 a family with two children over age 6 ($7,200 if they’re under 6) will receive under the new plan.
Alternatively, it may be more informative to compare “welfare” payments with the incomes of typical families. In 1970, an A.F.D.C. family of three received about 25 percent of median income for three-person families — hardly a generous allowance, but maybe, just, enough to live on. The new legislation will give a single parent of two children less than 7 percent of median income.’

‘To be honest, I’m not sure what provoked this change. Many expected major change under President Barack Obama, elected in the wake of a financial crisis that should have discredited free-market orthodoxy. But although he achieved a lot — especially Obamacare! — there wasn’t a big paradigm shift.’

A big paradigm shift? That might be a tad too early.

And who’s responsible for the change? Covid and Trump.

These two disasters made the ‘Rhineland Model’ popular or at least acceptable in the US.

But the idea that minorities may benefit as well from the safety net is still unpopular among a considerable part of the electorate, in the US, in the Netherlands, in Germany, in France et cetera.

Welfare is only for people like us. That’s where discrimination begins. Not for the refugees, the Mexicans, the Blacks, the unmarried women et cetera.

The state is no miracle cream, but the government is probably better at saving citizens and residents from poverty than the passerby on the street, handing out some dollars to his favorite beggar.