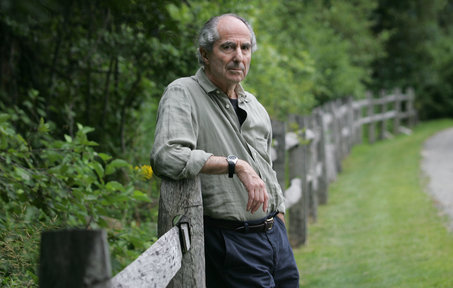 On the splinter of ice – Michael Gorra in NYRB:

‘But isn’t that the problem? The problem not with biography itself so much as with this man’s biography? Because we want to know these things about him. Roth drew and smudged and drew again the line between life and art, and with every book it became harder to choose between them. He liked to complain that his reviewers thought he was the only novelist in America who never made anything up, but he also knew that the most effective lies stick as close to the truth as possible. Most of his characters have an immediate source in his own life, the women especially, and he had the necessary “splinter of ice in the heart,” as Graham Greene once put it, that allowed him to turn the people he loved into material. Himself too, and usually in far less flattering ways. But the particular things that happen to those characters aren’t always so immediately sourced, though here life itself might play him a trick. He once bared his chest to show an interviewer that he didn’t have a bypass scar, unlike his doppelgänger Zuckerman. Two years later he did, and joked that it was no good to him, he’d already used it.’

‘His whole oeuvre is a series of counterlives, alternate takes on the same material, like Rembrandt’s self-portraits or Monet’s waterlilies. And of course The Counterlife itself provides the best example: five versions of Zuckerman, and so loaded with irreconcilable details that each contradicts the others. None of them is entirely reliable, none the norm from which the others vary. So meaning itself becomes unstable: a book without a bottom, and sublime.
We’re fools to go on reading Roth’s work as if it were a disguised autobiography, and The Counterlifesuggests a better way. The slippage between its different Zuckermans makes it seem a work of metafiction, but as we read each section it’s as real as fiction can be. Its dizzying effect depends, that is, on the writing—on Roth’s craft and art and skill, the things that most readers take for granted. Here are a few sentences from the opening pages of The Anatomy Lesson (1984), chosen almost at random. Zuckerman here suffers from a writer’s block in which the psychological and the physical are as one, and no doctor seems able to help. He wears a neck brace, there’s a “hot line of pain” running from his right ear to the middle of his back, and he’s treating himself with Valium and vodka. Sitting at the typewriter proves excruciating, but writing manually was no better. Even in the good old days, pushing his left hand across the paper, he looked like some brave determined soul learning to use an artificial limb. Nor were the results that easy to decipher. Writing by hand was the clumsiest thing he did. He danced the rumba better than he wrote by hand. He held the pen too tight. He clenched his teeth and made agonized faces. He stuck his elbow out from his side as though beginning the breast stroke, then hooked his hand down and around from his forearm so as to form the letters from above rather than below.
None of these sentences is especially notable. They’re not like Saul Bellow’s—they don’t demand that we look at them, admire them. We look through them instead, look at the things they describe, the mock-heroic bathos of that “brave determined soul,” and then the visual precision of that stuck-out elbow. But look again and Roth’s little bits of repetition will start to catch, those four sentences beginning with “He,” three short and one long. We don’t notice the style and yet we do hear the voice, a distinction the novelist himself made in The Ghostwriter (1979), and what that voice has to give is a propulsive sense of rhythm and pace, the tick tick tock of the most purely readable prose in all American literature.’

‘And as I write this something else begins to nag, and the question Roth asked Bailey at their first interview starts to seem relevant. The drama of assimilation, the traditions of Jewish comedy and storytelling from which Roth’s own sense of performative outrage emerged: all that, and Newark too, seems muted here. It comes to us without the historical texture that marks Roth’s own account of the place, the layered sense of a milieu, at once sustaining and stifling, that marks even his most minor books. Maybe that’s unfair; still, there it is. Bailey has traced the novelist’s every relative and their medical records too, he’s defined the financial ups and downs of their immigrant history in America, but he doesn’t have the same grasp on this world that he does on the reticences of Cheever’s.
What he does superbly, in contrast, is chart Roth’s sexual and emotional life, and map its effects on his work. Some of this is straightforward. An English journalist with whom he had an affair while married to Bloom became the model for Maria in The Counterlife, and the haunted Faunia Farley in The Human Stain had a specific source as well. Almost all of Roth’s lovers have a place in his fiction, and most are remembered warmly, with the exception of the two he married. One thing that surprised me was just how conscientious a stepfather he was to Margaret Williams’s young children. He taught her daughter to read, and both she and her brother credit him with saving their lives; even Williams’s first husband speaks well of his influence.
But it didn’t work that way with Anna Steiger, Bloom’s daughter with the actor Rod Steiger. The novelist and the actress already knew each other slightly when they met up again in 1975, each of them now newly alone. Things then moved quickly, and they soon decided to split their time between Roth’s farmhouse and Bloom’s own home in London. Steiger was sixteen when the two began living together, and she proved hostile from the start.’

‘Certainly there’s a bill to draw. Roth was vindictive, and not just toward Bloom; The Human Stain (2000) is marred by its caricature of an academic feminist, the kind of reader he felt was determined to misunderstand him. He dropped editors and friends who no longer seemed useful, and he was compulsively unfaithful. After the end of his second marriage he had a series of short-lived affairs with ever-younger women. Bailey writes that he “enjoyed playing Pygmalion,” and he treated his girlfriends generously, too generously; a gift to one of them of $100,000 made me feel queasy, as though the check itself said “stick around.” But eventually sex was over, even for Philip Roth, and really around the time he stopped writing fiction. His last years were surprisingly peaceful, despite his enduring physical pain. He read deeply in American history; he renewed his friendship with some of his old loves, and their companionship helped ease his body’s passage.’

Rhythm and pace are of the essence of fiction, and probably non-fiction as well. But they can never replace or I should say, disguise an author who simply has nothing to say.

Sex and fiction as compatible endeavors.

Sex is fiction, I would say, largely.
And fiction is built on desire of its characters, of the author, of the readers, not all desire is sexual, but most desire is interwoven with bodily urges.

And how many splinters of ice in the heart do you need as an author?