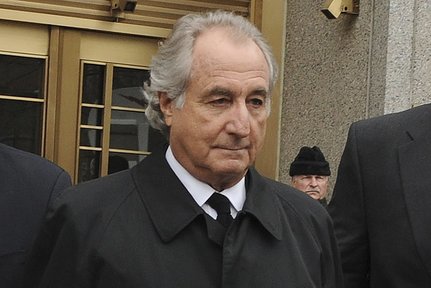 On a Ponzi scheme – Diana B. Henriques in NYT:

‘Bernard L. Madoff, the one-time senior statesman of Wall Street who in 2008 became the human face of an era of financial misdeeds and missteps for running the largest and possibly most devastating Ponzi scheme in financial history, died on Wednesday in a federal prison hospital in Butner, N.C. He was 82.
The Federal Bureau of Prisons confirmed the death, at the Federal Medical Center, part of the Butner Federal Correctional Complex.
Mr. Madoff, who was serving a 150-year prison sentence, had asked for early release in February 2020, saying in a court filing that he had less than 18 months to live after entering the final stages of kidney disease and that he had been admitted to palliative care.
In phone interviews with The Washington Post at the time, Mr. Madoff expressed remorse for his misdeeds, saying he had “made a terrible mistake.”’

‘Buttressed by elaborate account statements and a deep reservoir of trust from his investors and regulators, Mr. Madoff steered his fraud scheme safely through a severe recession in the early 1990s, a global financial crisis in 1998 and the anxious aftermath of the terrorist attacks in September 2001. But the financial meltdown that began in the mortgage market in mid-2007 and reached a climax with the failure of Lehman Brothers in September 2008 was his undoing.
Hedge funds and other institutional investors, pressured by demands from their own clients, began to take hundreds of millions of dollars from their Madoff accounts. By December 2008, more than $12 billion had been withdrawn, and little fresh cash was coming in to cover redemptions.’

‘More than money was lost. At least two people, in despair over their losses, died by suicide. A major Madoff investor suffered a fatal heart attack after months of contentious litigation over his role in the scheme. Some investors lost their homes. Others lost the trust and friendship of relatives and friends they had inadvertently steered into harm’s way.
Mr. Madoff was not spared in these tragic aftershocks. His older son, Mark, died by suicide in his Manhattan apartment early on the morning of Dec. 11, 2010, the second anniversary of his father’s arrest. He was characterized by his lawyer, Martin Flumenbaum, as “an innocent victim of his father’s monstrous crime who succumbed to two years of unrelenting pressure from false accusations and innuendo.” One of Mark Madoff’s last messages before his death was to Mr. Flumenbaum: “Nobody wants to believe the truth. Please take care of my family.”’

‘In December 2012, Peter Madoff forfeited all his personal property to the government to compensate his brother’s victims; he was sentenced to a 10-year prison term. And on Sept. 3, 2014, Mr. Madoff’s younger son, Andrew, died of cancer at the age of 48. He had blamed the stress of the scandal for the return of the cancer he had fought off in 2003.
Besides the human toll, professional reputations were destroyed. More than a dozen prominent hedge funds and money managers, including J. Ezra Merkin and the Fairfield Greenwich Group, had to admit that they had forwarded their clients’ money to Mr. Madoff without detecting that he was running a fraud. Swiss private bankers, global commercial banks and major accounting firms were dragged into court by clients who had relied on them to monitor their Madoff investments.’

‘Financial scholars later theorized that Mr. Madoff’s Ponzi scheme lasted so long because it had appealed more to his clients’ fears than to their greed: He promised them consistency in an increasingly volatile market, not eye-popping returns. And he always delivered, never failing to honor a redemption request, and never falling short of the profits he had forecast.
By the 1990s, a cottage industry of hedge funds and private partnerships had grown up to serve as supposedly exclusive portals through which investors could benefit from Mr. Madoff’s investment genius. These funds collected billions of dollars that he used to pay promised profits to his early clients and cover withdrawals when necessary.’

‘Before being sentenced on June 29, 2009, in a Manhattan federal courtroom packed with spectators and victims, he read from a statement he had prepared with his defense lawyer, Ira Lee Sorkin.
“I am responsible for a great deal of suffering and pain, I understand that,” he told the court. “I live in a tormented state now, knowing of all the pain and suffering that I have created. I have left a legacy of shame, as some of my victims have pointed out, to my family and my grandchildren.” Mr. Madoff is survived by his wife, Ruth; his brother, Peter; his sister, Sondra M. Wiener; and several grandchildren.
He leaves nothing of his former wealth behind. As part of its criminal case, the government sought more than $170 billion in forfeited assets, a figure that apparently includes all the money that moved through Madoff bank accounts — for whatever purpose — during the years of the fraud.’

‘On July 14, 2009, Mr. Madoff began serving his 150-year sentence in a medium-security facility at the Butner correctional complex, about 45 minutes northwest of Raleigh, N.C.’

First of all, we should get rid of bizarre sentences like 150 years to life.

Also, the distinction between fear and greed might be much smaller than we thought.

Sure, Mr. Madoff was a con man, but his clients were hardly underprivileged hardworking Americans.

The con man can operate where the desire to outsmart the casino is robust.