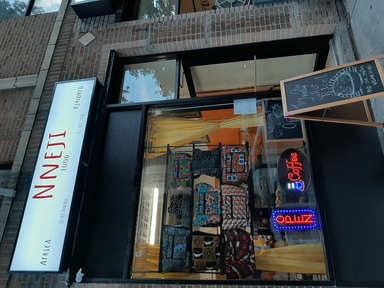 On onions and goats – Pete Wells in NYT:

‘Nneji, which opened last summer, carries groceries from both parts of the world. It is not a store where you will buy all the ingredients you need to make dinner, but you will find things there that your supermarket probably doesn’t stock.
Greek olives and olive oil share one small patch of wall with shea butter and African black soap. A neighborhood roaster, Mighty Oak, supplies single-origin coffee from farms in Kenya, Ethiopia and other countries, on display next to cans of palm fruit concentrate from Ghana and evaporated milk from Greece. Pastries from local bakeries — walnut baklava, pistachio-loaded phyllo tarts, ventagli in the shape of rabbit ears — are kept in a glass case.
Ms. Ajaero’s parents are Igbos from Nigeria who were children in the 1960s, during the country’s civil war. Before she was born, they immigrated to New York City, where she was raised. Her mother is responsible for the menu with guidance from her aunts, while Ms. Ajaero oversees the day-to-day cooking.’

‘The onions in Nneji’s yassa are cooked just to the point that chefs call crisp-tender. They are flavored with black pepper and lemon in a mustard sauce that tastes like the August sun at noon. Yassa is almost invariably braised with chicken. At Nneji, they are cooked separately, to put the yassa within the scope of vegan customers. If any braised onions ever deserved solo billing, these are those onions.’

‘“Do you like goat?” she asked one afternoon. I do. When it smolders with ginger, cayenne and Scotch bonnets, as the goat at Nneji does, I like it very much.
“Then I’m going to give you some goat with your red stew, because it doesn’t have as much cow foot in it as I would like,” she said. The red stew did look a bit like marinara that day, although the chiles and other spices still rang out clearly, and its lip-smacking glossiness strongly suggested that a foot had been brought to bear at some point. Ms. Ajaero must have remembered me as a goat guy, because without saying a word she spooned some into a pint container of okazi the next time I bought dinner from her.’

Sometimes you want to visit a restaurant (or a shop) just because of sentences like this:

If any braised onions ever deserved solo billing, these are those onions.

Do you like goat?” she asked one afternoon. I do. When it smolders with ginger, cayenne and Scotch bonnets.

But onions that deserve a solo billing will make me travel to Queens as soon as I’m back in NYC.