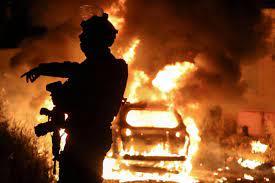 ‘Palestinians in East Jerusalem’s Sheikh Jarrah neighborhood are fighting their eviction by organizations seeking to settle Jews in the area.’

‘The settlers have portrayed the conflict as a legal battle over real estate, but neighborhood residents, helped by left-wing activists in Jerusalem, depict it as a fight against Judaization and discrimination in the capital. In recent weeks, as hundreds of residents faced eviction, and amid tension during Ramadan at Damascus Gate and the postponement of the Palestinian general election, the struggle spilled beyond Jerusalem’s borders. Arab Israelis, the Arab world, international media outlets and, above all, Palestinians in Jerusalem have taken an interest in the fight.
Israel intends to evict 300 people from their homes in favor of Jews based on lawsuits to realize property claims from before 1948. But this could open a Pandora’s box: According to conservative estimates, 30 percent of West Jerusalem real estate was owned by Arabs before 1948.
In 2010, two researchers at the Jerusalem Institute for Policy Research, Prof. Yitzhak Reiter and Lior Lehrs, proposed a simple solution: expropriating land from Nahalat Shimon. Since 1967, the state has expropriated tens of thousands of dunams from private Palestinian landowners to build huge Israeli neighborhoods in East Jerusalem.
The thinking is, why shouldn’t the state opt for a small expropriation, this time from Jews for the benefit of Palestinians? Only the finance minister’s signature is needed to expropriate the few dunams on which the Sheikh Jarrah residents live. The land would be handed over to the Palestinians or remain in state hands, ensuring their presence. Nahalat Shimon would be compensated in return.
In their proposal, Reiter and Lehrs quote an opinion by a deputy attorney general from the past, Menachem Mazuz. In 1999, in response to a similar incident, Mazuz referred to the government’s authority to expropriate property for a “public need.” “It is unacceptable that the government is authorized to expropriate land for cultural or environmental needs or to prevent unemployment, but is not authorized to expropriate land for diplomatic considerations,” Mazuz wrote.
It is believed that this solution would ease tensions at a potential flash point for violence in the capital, improve Israel’s international standing and Israeli-Palestinian relations in Jerusalem, be a confidence-building measure ahead of renewed negotiations with the Palestinians, remove an issue from the agenda of the International Criminal Court in The Hague, and weaken the Palestinian demand for opening a debate on property left behind in 1948.’

The conflict is about real estate, has been one of the more famous sayings about the conflict that became totally overshadowed by many other conflicts.
I’m a fierce defender of property rights, but the state should be able to nationalize ground to preserve peace, of course not without compensation.

Neighborhoods change all the time, the population changes, this is called gentrification and ‘ethnic cleaning’ might be a side effect of the gentrification.
But in Israel, especially in Jerusalem gentrification can be the beginning of widespread civil unrest, maybe even war. Gentrification in Jerusalem is not the same thing as in Brussels, Berlin or New York.

Hopefully some Israeli politicians will be able to ignore the temptation of fanning the flames.