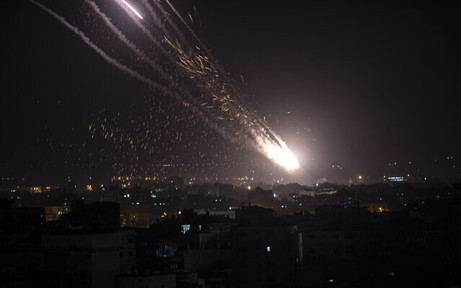 On developments – Amos Harel in Haaretz:

‘Wednesday, the tenth day of the Israeli operation in the Gaza Strip, saw two dramatic developments. First, four rockets were fired from Lebanon at Acre and the Haifa Bay communities. Immediately after that, the White House released an official statement about the content of a phone conversation, the fourth since the beginning of the operation, between President Joe Biden and Prime Minister Benjamin Netanyahu. This time, Biden ratcheted up the tone and told Netanyahu that he expected significant de-escalation that same day. These events seem to be bringing us closer to the end of the operation, but the potential for destruction has not yet been exhausted.’

‘Meanwhile, Netanyahu has a more urgent interest to respond to – the almost unprecedented demand by Biden for Israel to hold its fire. The prime minister did not hear language like that from Biden’s predecessor, Donald Trump. In fact, it seems like the harshest demand from Israel by an American administration since the demand by then Secretary of State Condoleezza Rice during the Second Lebanon War in 2006, after Israel was accused of killing civilians in Kafr Kana. Rice’s demand ended with a two-day humanitarian cease-fire, after which Israel and Hezbollah fought each other for two more weeks. This time, Biden wants a complete cessation.’

‘On Tuesday night a somewhat strange report came out on television that the Israel Defense Forces wanted to continue the operation because it believed there was a chance to assassinate the head of the Hamas military wing, Mohammed Deif. First of all, everyone knows (including Hamas) that Israel is aiming for Deif and the Hamas leader in the Gaza Strip, Yahya Sinwar. Secondly, if indeed the chances of striking Deif improve, why should the IDF announce it in the media?’

‘Therefore, Netanyahu’s statement is not only part of games of psychological warfare against Hamas, it is also a maneuver against the General Staff. The prime minister is signaling that from his perspective the option of a ground operation is on the table. If that does not come about (and it probably won’t), from his point of view that already will be someone else’s responsibility. People with long memories will certainly remember the leak of the secret presentation the IDF showed the cabinet at the end of the 2014 Gaza war, shortly before the cease-fire went into effect. At that time, a military prediction was reported that the occupation of Gaza would cost hundreds of lives – and somehow, the person who leaked the presentation was never found.’

‘But a new risk must be taken into account. In light of the many clashes in the West Bank and the weakening of the Palestinian Authority, might we not go spiral into a third intifada in the territories?’

Sometimes, the military is more realistic than the politicians and the game being played out between military and government in times of war is mainly a game that’s all about avoiding responsibilities.

The achievements are limited, as Harel rightly points out.
Not too lang ago, Haaretz could write that only the extreme-right in Israel wanted a third intifada, now a third intifada is a serious option.

Netanyahu’s government was dragged into this war, also because of haughtiness. It wrongly believed that Iran was a more serious threat than Hamas. It thought it can play with fire in Jerusalem without any serious consequences.

The people are once again the victims of leaders, who wrongly believe that the army can save politicians from their own lethargy and cynicism.