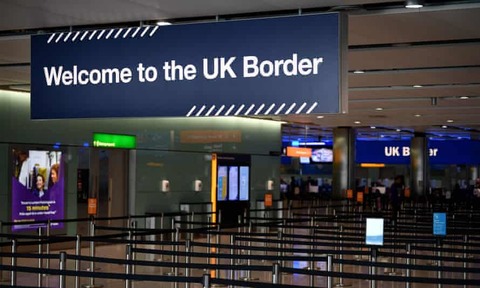 On nastiness and Brexit – Lisa O'Carroll in The Guardian:

‘EU citizens living and working in the UK have revealed how they are being met with suspicion and threats that they will be refused entry at the UK border for the first time in their lives, fuelling fresh fears that Border Force officials have not been trained in the new Brexit rules.
Wolfgang, a German national who runs an IT business, was detained at Heathrow airport despite having proof of settled status, indefinite leave to remain and a British passport on the way.
He is furious that his rights were suspended on the whim of a Border Force official.
“I have settled status,” he said. “I have indefinite leave to remain. I am about to become a British citizen. How is it that a border official with one tick can suspend those rights?”’

‘Hilary Benn, a Labour MP and the former chair of the now-disbanded Commons Brexit select committee, said cases such as Wolfgang’s raise concerns about what is in store for the 4.9 million EU citizens who have already been granted settled or pre-settled status, especially as they start to return from visits to their countries of birth when Covid restrictions are lifted.
“It’s worrying to hear of these incidents happening. The Home Office needs to make sure that all Border Force staff are fully trained in applying the new rules.” Referring to a new Brexit body set up in January to protect EU citizens’ rights, Benn added: “This is something that the Independent Monitoring Authority needs to look at.” Among the other cases is that of Antonio, a Spanish airline worker who was made to wait for 45 minutes at Gatwick while border officials tried to decide if he was lying when he told them he had pre-settled status.’

‘The Home Office said it was unable to investigate the reports as it had not been “provided details of the alleged persons involved”.
A spokeswoman added: “EU citizens are our friends and neighbours and we want them to stay in the UK, which is why we launched our ground-breaking EU Settlement Scheme.
“Those who do not have status under the EUSS can enter the UK for up to six months as visitors, visa free. However, now freedom of movement has ended, those coming to work or study must prove they meet our entry requirements. We urge people to check the requirements before travelling.’

Read the article here.
Freedom of movement has ended. An ominous sentence.

The ‘ground-breaking EU Settlement Scheme” is straight of another dystopian novel.

Well, now also Germans, Italians, Belgians and Dutch know what it means to unwanted: interrogation, hand cuffs, the knowledge that you are at the mercy of an immigration officer.
The US was already offering this experience, but now taking the plane to London is enough for an adventure in the sizzling bureaucracy of immigration.