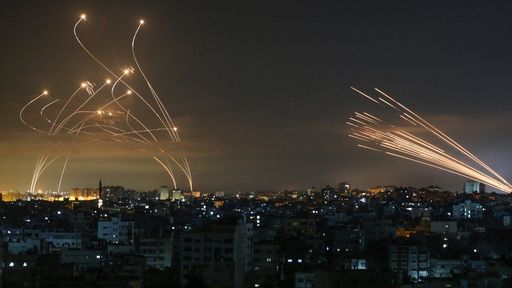 On a false sense of security – Anshel Pfeffer in The Atlanic:

‘If you’ve been watching coverage of the latest round of fighting in Gaza and Israel, you won’t have escaped the Iron Dome pyrotechnic display, astonishing especially at night as the rockets arching northward from Gaza are picked out of the sky in a litany of mid-air explosions. When it was first established more than a decade ago, Iron Dome had its skeptics, both in Israel and abroad, but over time, they—and the world—have seen it work. Literally.’

‘This architecture is, however, just one of the ways in which Iron Dome is unique. In fact, its very strengths and weaknesses reflect those of the country that developed it, epitomizing Israel’s interminable conflict with the Palestinians.
“On the one hand, Iron Dome is the perfect example of Israeli ingenuity and improvisation,” the journalist Yaakov Katz, who co-wrote The Weapon Wizards, a book about Israel’s arms industry, told me. “But its very success is a reflection of Israel’s biggest problem. Iron Dome allows you to almost ignore the fact that you have a neighbor just across the border with thousands of rockets pointed at you, because they can no longer really harm you. Iron Dome allows you not to find deeper solutions for that problem. And that’s very Israeli as well.”’

‘But it also means many Israelis do not feel the urgency, or sufficient enough optimism, to press their leaders to solve the underlying problems causing the long-term crisis facing Gaza, where 2 million people live in a fetid, crowded coastal strip, under near-total blockade by Israel and Egypt since Hamas took over in 2007. Nor do many feel the need to address the wider historic conflict with the Palestinians that has been going on since before Israel’s founding in 1948. According to the pollster Dahlia Scheindlin, Israelis rank security first on their list of priorities, followed by financial concerns; resolving the conflict with the Palestinians typically ranks fifth or sixth, and is seen by Israelis as separate from the feeling of security. “You’ve got to ask yourself,” Scheindlin told me, if Israelis focus on security as defined by a piece of military hardware rather than on the core problem itself, “isn’t that a false sense of security?”’

‘Netanyahu has insisted the opposite: that if Israel remains steadfast, the world, including Arab states, will give up on the Palestinian cause. He wrote in his 1993 book, A Place Among the Nations, that “for the foreseeable future the only kind of peace that will endure in the region between Arab and Arab and between Arab and Jew is the peace of deterrence,” and that such a strategy would have to suffice until the Arab world realized that it “stands to gain as much from making peace with Israel as Israel stands to gain from making peace with the Arabs.” Iron Dome is one of his tools for keeping the peace of deterrence and making time work in Israel’s favor.’

‘Yet behind this technological marvel is creaking national infrastructure and failing social services, for both Jewish and Arab citizens. That’s why, when the few rockets from Gaza did get through the Iron Dome shield this month, those who were killed were in nearly all cases old, disabled, poor, homeless, or residents of Arab villages without government services and therefore no bomb shelter. And while Israel’s air force simultaneously operated Iron Dome and kept up a steady rate of air strikes in Gaza throughout the recent campaign, within Israel’s cities there were insufficient police to deal with the riots that broke out between Arabs and Jews. Here we see another structural flaw in the Israeli state that Netanyahu has neglected.
With its remarkable success rate, Iron Dome is as close as possible to being the perfect defense system. It illustrates Israel’s remarkable technological prowess and the country's unwavering focus on the defense of its citizens. But Iron Dome's tremendous capabilities paper over more fundamental challenges—ones that Israel’s leader seems unwilling to resolve.’

Iron Dome should be considered a success, moreover it’s a morally just weapon, it’s pure defense. Even if you take the position that the status quo in Israel, Gaza and on the West Bank is morally indefensible, it’s hard to condemn Iron Dome.

Pfeffer’s point is that Iron Dome permits Israel to prolong the suffering of Palestinians and of its own underprivileged citizens, it’s a mean to an end: postponing difficult political decisions indefinitely.

There was a time that the old belief that the status quo was unsustainable was ridiculed, for many reasons. After the deadly riots in Israel, the Gaza war, and the risk of a third intifada suddenly the old question came up once again: how sustainable is the status? Isn’t this Yugoslavia south of Lebanon?

We may see the last days of the Netanyahu as prime-minister, but still I’m not convinced that the unsustainable status quo will blow up any moment. Or in the near future, for that matter.

Syria, Egypt, Iraq, Lebanon, the region is full of unsustainable status quo’s that keep on going.