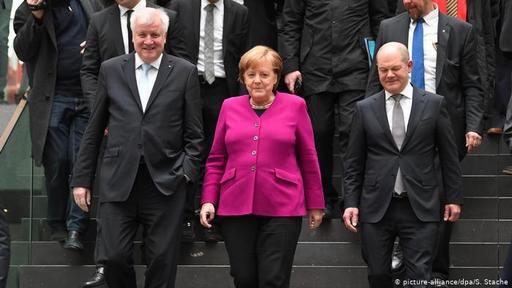 ‘Within the coalition, everyone is only looking out for their own interests, and that of their party. The SPD is seeking to boost its candidate for chancellor, Finance Minister Olaf Scholz, while even ministers from Merkel’s own CDU are starting to do their own thing. The chancellor’s word no longer carries much weight. Disagreements are no longer taking place behind the closed doors of cabinet meetings, and lately, it has been Merkel’s own conservatives who are growing increasingly prickly on a number of issues. Projects on which the two parties agreed on years ago have suddenly become controversial once again.
The idea of passing a law to promote democracy by doing more to combat right-wing extremism, for example, first arose in 2013 – a product of the investigative committee in parliament that was looking into the murderous activities of the neo-Nazi terror cell National Socialist Underground, which killed nine people of foreign descent between 2000 and 2006, yet was only discovered in 2011. The CDU, CSU and SPD quickly included the proposal in their coalition agreement. The idea was to provide lasting support to initiatives combating right-wing extremism and eliminating the requirement for them to constantly file new grant applications. The law would also obviate the need to renegotiate funding for such programs as part of annual budget wrangling.’

‘Last year, though, Interior Minister Seehofer, a member of the CSU, suddenly threw his support behind the law, saying it was "necessary in these times.” And with the establishment of the cabinet committee focusing on right-wing extremism, it suddenly looked as though its chances for passage were realistic.
But shortly before the draft law was to be introduced in the cabinet, conservatives suddenly had second thoughts. What if, they feared, the wrong initiatives received funding? What if state funding ended up in the hands of anti-democratic, left-wing extremists? To prevent such abuse, the CDU and CSU demanded that all funding recipients be required to sign a commitment to liberal democracy. The SPD agreed, but the conservatives still aren’t happy, arguing that the Social Democrats were seeking to water down the commitment to democracy by making it simply a box that had to be checked on the application. It is "pathetic,” says Mathias Middelberg, parliamentary spokesman for the conservatives on domestic affairs, that the SPD "is resisting a democracy clause that should be self-evident.” Negotiations are continuing, but the coalition partners now believe it is unlikely that the project will be completed. There are many points of controversy, say coalition sources, and there also isn’t time to complete an expert evaluation. The SPD is angry at the conservatives’ obstruction. "There was a good compromise between (ex-Family Minister) Franziska Giffey and Horst Seehofer,” says deputy SPD floor leader Dirk Wiese. "That conservatives are rejecting a proposal from their own interior minister is beyond annoying.”’

‘When it comes to coalition projects, much of the obstruction appears to be coming from the CDU and CSU, which has a lot to do with the current disposition of their parliamentary group. A leading CDU politician says that a sense of nervousness has taken hold within conservative ranks. Many are wondering how they will be able to score points in the campaign. What if people suddenly realize that a lot of the laws Merkel’s government has passed or has proposed are more center-left than center-right – or even green?’

‘The German parliament has just two weeks to go until the summer break, after which the campaign will be in full swing. It is hard to imagine that the coalition will be able to push anything significant through before then. "The CDU and the CSU have nothing more to offer,” says senior SPD parliamentarian Carsten Schneider.
Michael Grosse-Brömer, a leader of the conservative group, is more optimistic, noting that the coalition has passed "more than 400 legal reforms.” And he believes that there is still time left to add to that total. Political projects, he says, are sometimes "like diamonds. They need great pressure to achieve the necessary shine.”’

Merkel has been declared a lame duck so many times before, especially by Der Spiegel, that it feels like déjà vu all over again.

Most interesting part: the German voter may wake up to discover that the Merkel governments were more center-left than center-right.

Well, people are stupid, but they are not that stupid. They must have discovered this a long time ago already. Probably, they liked it. At least, they didn’t hate it enough.