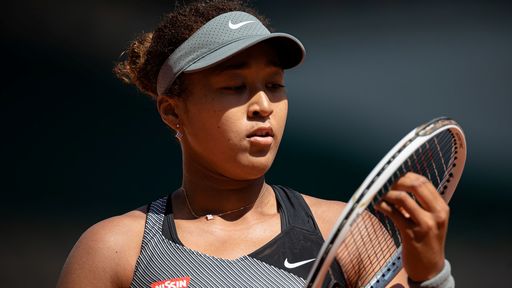 On knowing what’s happening in other people’s minds – Louisa Thomas in The New Yorker:

‘After Naomi Osaka hit a backhand winner on match point to defeat Patricia Maria Țig in the first round of the French Open, on Sunday, she smiled as she lowered her head, and then tugged her gray visor down. These were familiar gestures; I’ve seen her half-hide her smile countless times. The following day, after she announced that she would be withdrawing from the French Open for the sake of “the tournament, the other players and my wellbeing,” five tumultuous days after announcing that she would not be speaking to the press during the tournament, my mind went to that moment, the last time that I had watched her. Then I thought of the first time I’d watched Osaka pull her visor over her eyes.
It happened in 2018, during the U.S. Open trophy presentation, after a match marred by controversy surrounding a confrontation between Serena Williams and the umpire. The crowd, which had been on Williams’s side, booed as Osaka was named the champion. Osaka cried, and tried to hide her face. She was twenty years old then, already launched into a life that everyone could see and that no one could possibly imagine. Over the next three years, Osaka won three more Grand Slams, and the publicity surrounding her career and her life grew even more intense. Her image was on the cover of Vogue and on billboards towering over Los Angeles and Tokyo. She became an icon, and she did iconic things. She helped design sneakers for Nike, a salad for Sweetgreen. In May, Sportico estimated that she had earned more than fifty million dollars during the previous year, which made her the highest-paid female athlete in history, breaking her own record. A recent Times feature about her ran under the headline “How Naomi Osaka Became Everyone’s Favorite Spokesmodel.”’

‘Reading her second statement, I thought of her pulling down her visor in 2018, and of how alone she had looked that night. She hadn’t been alone, though. Standing next to her on the stage, Serena Williams saw her grab her visor, and put her arm around her. When asked recently about Osaka’s struggles, and what resources the tour offered to struggling players, Williams, one of the few people who might be able to imagine what Osaka’s life has been like these past few years, talked about the importance of actively seeking help. “I think that’s so important to have a sounding board, whether it’s someone at the W.T.A. or whether it’s someone in your life,” Williams said. “Maybe it’s someone that you just talk to on a weekly basis. I’ve been in that position, too. I’ve definitely had opportunities to talk to people, kind of get things off my chest that I can’t necessarily talk to anyone in my family or anyone that I know.” Tennis is notoriously punishing to the psyche, even without the complex dynamics that come with being a private person in a very public position, or a young woman of color in a sport run predominantly by white men, or an ambitious athlete who, on even her bad days, is expected to win every match. But, then, it’s impossible for any of us to know what is happening in Osaka’s mind, beyond what she tells us.’

It’s not really benign to force athletes to go to press conferences, even if they make millions of dollars.
The right to remain silent is an important right.

‘Die Gedanken sind frei’ – thoughts are free. On the condition that you can hide them. Privacy begins and ends with the other person not knowing what goes on in our minds.