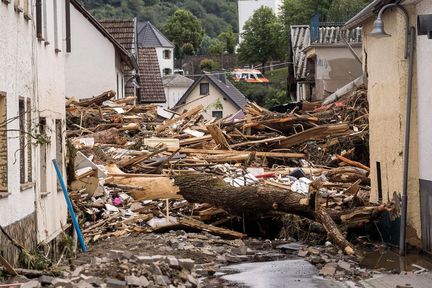 ‘Perhaps at the end of Germany's current election campaign, the candidates will be asked this: Where were you on Thursday, July 15? What did you do, what didn’t you do, and what did you say? Perhaps this Thursday will go down as the day that changed everything, or at least a lot of things, and when nature rendered any kind of campaign planning worthless. Perhaps this Thursday was the day the real campaigning began. The day after the storm, after the flood.’

‘Perhaps at the end of Germany's current election campaign, the candidates will be asked this: Where were you on Thursday, July 15? What did you do, what didn’t you do, and what did you say? Perhaps this Thursday will go down as the day that changed everything, or at least a lot of things, and when nature rendered any kind of campaign planning worthless. Perhaps this Thursday was the day the real campaigning began. The day after the storm, after the flood.’

‘So, far the campaign running into the September election for Germany's parliament, the Bundestag, which will also determine who becomes Angela Merkel’s successor as chancellor, has been characterized by a disturbing imbalance. The issues at stake could hardly be greater: Most importantly, the climate crisis – and the question of how humanity can keep the planet habitable – demands answers. Instead, the debate has focused on the resumé of the Green Party candidate and passages in a book she wrote that appear to have been copied. And the fact that the CDU dressed up female employees at their party headquarters as policewomen or nurses and printed photos of them on posters. So far, the campaign has been petty and lacked the gravitas of an election of this importance.’

‘It’s a very fine line, and you can get a lot wrong in the early hours and days. If Armin Laschet hadn't rushed to Altena and Hagen, he would have been rightly told that he was acting as if he had already become chancellor and was no longer interested in the people of his home state. He wouldn’t have been able to rid himself of that stain easily. As governor of the state of North Rhine-Westphalia, he is responsible by virtue of his office. And he is likely to remember the response of his predecessor, the Social Democrat Hannelore Kraft, in the summer of 2014. At the time, a storm in the city of Münster in the state had caused severe flooding and deaths, but it took Kraft several weeks to travel to the site of the disaster. By way of explanation, the governor said that she had been on a ship in the eastern state of Brandenburg for a week and had no mobile phone reception there. Incidents like that had helped Laschet defeat Kraft in an election three years later.
But how should Annalena Baerbock, Laschet’s rival for the Chancellery respond? Or Olaf Scholz? It was more challenging for them from the start. Should they cut off their holidays? They could have been accused of knee-jerk responses or trying to boost their images by showing up at the disaster site. Scholz did so, anyway, and traveled to Rhineland-Palatinate. The two couldn’t please everyone during the first few hours, anyway. They just had to make as few mistakes as possible.’

‘Politics is always a battle of images, and Schröder won that one. He continued to campaign on the issue, too, inviting representatives of other EU countries that had also been hit by the floods to a crisis summit in Berlin and postponing tax reform so money would be available for an aid package worth billions. "I didn’t have those possibilities as a challenger,” Stoiber said. The conservatives lost to Schröder’s SPD on election night.
So, how likely is it that this week’s flooding will have an impact on the election? Does Laschet have an advantage because of his deep ties to the region as governor of a state hit by the flooding? Or will the Greens benefit as the focus shifts to climate change, one of their core issues? There are two levels at play here – the operational, which is about getting relief to the region quickly. And the fundamental, meaning plans for the future. Operationally, Laschet has the advantage. And otherwise?’

‘Habeck was striking the right chord now – he knew that this wasn't the Green Party's hour – that would come in a few days, when the discussion shifts from the event itself to the causes. He knew that he has to avoid arousing even the slightest suspicion that the catastrophe is convenient for the Greens.
As harsh as it may sound, though, the floods do play to the Greens’ advantage. The natural disaster gives them a chance to revamp an election campaign that hasn’t been going very well for them so far. That’s not to say that there are cynical and evil people running around within the Green Party. Any other party would be calculating when it came to an event like this.’

‘The major question now is the degree to which this week’s severe weather is linked to climate change. It is a battle over who has the authority to interpret events, and it began on Thursday on social media and in newspaper editorials. The issue will be debated bitterly, because so much hinges on it.
Some will say that these kinds of disasters have always happened. Others will say it hasn’t happened with this frequency.
Yet others will claim it is a coincidence. And there are many who will say it is climate change.
The issue is already dividing society. But where does the truth lay?”

‘German Interior Minister Horst Seehofer offered even clearer words. "No one can seriously doubt that this disaster is related to climate change," the minister said. He announced the German government would set up a federal aid program in coordination with the affected states and municipalities. "You can expect it to be a big package," he says.
More than anything, this week’s events change everything for Laschet as a chancellor candidate. His campaign so far has been designed to lull people into a sense of security, to make them feel that things can stay more or less as they are. Laschet was counting on satisfied citizens who, after a year and a half of the pandemic, would vote as they had done so many decades before. This would mean a majority would cast votes for the CDU and its CSU sister party. Of course, Laschet also talked about change, but it always seemed like he was talking about Germany as if it were some kind of dollhouse, where all you had do was push one little bed from one corner to the other -- the point being that there wouldn’t be any radical changes. Then came the weather. And sometimes there is nothing more radical than the weather.’

‘This week’s flooding is likely to shape the agenda for weeks to come. It’s not the kind of event you can quickly move beyond – it’s not a slight hiccup on the campaign trail. It’s going to force some rethinking in the campaign.’

Politics is a battle of images. Yes, but then how can you expect an election campaign to have the right gravitas?

Climate change was dividing society before this catastrophe and it will continue to do so.

My take is that the flood disaster of last Thursday will have a minor impact on the German election this fall. There are no Muslims, no minority you can blame for past and future catastrophes. The fear in this case is too abstract, with this kind of fear – a fear without a real enemy, unless you consider mankind itself your enemy – you don’t win the battle, at least not the battle in politics.

‘And sometimes there is nothing more radical than the weather.’

Yes, sometimes, but the weather is not a casus belli; the weather won’t change the German mindset. Especially since CDU-CSU (Merkel/Stoiber) openly admitted that climate change is also responsible for the flood disaster. In other words, there is less disagreement than this article is willing to admit, at least not in the upper echelons of the German parties, with one exception of course: AfD.

If you look at the polls the coming days and weeks, take a look at the AfD. My bet: well below 15%.