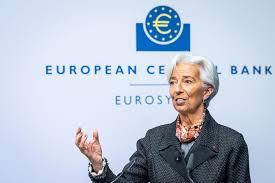 ‘DER SPIEGEL: Lagarde has a reputation for being a good communicator. Has this impression been confirmed? Marsh: Internally, definitely yes. The hawks believe the climate has greatly improved. They know that Lagarde understands less about the technical side of monetary policy than they do, but also that she has other talents.
DER SPIEGEL: Such as? Marsh: Her persuasiveness, her many years of experience as managing director of the International Monetary Fund, her contacts in politics, especially with French President Emmanuel Macron. But also, the connections she has established in the U.S., Germany and Italy.’

‘DER SPIEGEL: Weidmann's predecessor, Axel Weber, also gave up in 2011 out of irritation over ECB policy. Does that not demonstrate that the Germans, or at least elements of the country’s political class, have never really come to terms with eurozone membership?

Marsh: I would put it in a more nuanced way: The Germans have had to face up the fact that they are not alone in the world. Thirty years ago, I wrote: "The Bundesbank is much too powerful to be controlled by others. But it has too much power to rule alone.” In 1999, Germany would not have accepted an immediate takeover of the Bundesbank by the ECB – which, at that time, did not have its current significance. Instead, we have seen a slow transformation, a gradual de-Bundesbankisation of the German central bank. Weidmann's departure is the latest step in a long journey. Germany’s leaders should have prepared the electorate for the final destination on this voyage. Angela Merkel did not want to – or could not – do this and has left it to Olaf Scholz. Perhaps that is Jens Weidmann's farewell gift to the new chancellor.’

‘Marsh: Instead of pure independence, which has been somewhat mythologized by the Bundesbank in the past, I prefer the word "autonomy.” This is what Karl Klasen, president of the Bundesbank under Chancellor Helmut Schmidt, rightly did in the 1970s. Now, the question of coordination between governments and central banks is becoming more difficult. Brakes will have to be applied to both monetary and fiscal policy. If the last two years have been difficult, the next five will be even more so. The ECB has to think about how to tighten monetary policy, for the first time since 2011. But the path is also growing narrower for fiscal policy. The future German government will no longer find it so easy or cheap to issue debt.
DER SPIEGEL: Why is that? German sovereign bonds, called Bunds, are still yielding negative returns, which means that investors pay the government money to buy German national debt.
Marsh: Yes, but if the European Commission issues as many of its own bonds as it has announced, then investors may prefer to buy these instead, which would drive up their price as the main alternative to Bunds. If the ECB and the national central banks can then buy up to 50 percent of these EU bonds as they plan to do, and not just a maximum of a third, as is currently the case with German federal bonds, then the European bonds could ultimately become more important than Bunds, and take on the role of a "safe haven” in troubled times. In such a case, German bond interest rates would rise, and it would become more expensive for Germany to take on new debt.
DER SPIEGEL: Back to the ECB. What exactly do you think Lagarde has to do? Marsh: The ECB has already announced that it will "moderately” reduce the monthly purchases of government bonds under the Pandemic Emergence Purchase Program from the recent level of 80 billion euros per month. The program has lowered interest rates and stimulated the economy, which was a good thing. But now we need to start looking for the exits.
SDER SPIEGEL: The term "moderately” is extremely vague.
Marsh: Yes, in September, PEPP purchases were still a significant €75 billion. But it was a step in the right direction. Ideally, the ECB should let the PEPP expire as planned at the end of March 2022. The PEPP may have to be extended by three months, until the end of June, for political reasons – because of the need, for example, to avoid financial market turbulence shortly before the French presidential elections in April 2022. But then it must be ended for good. Lagarde should announce this at the Council meeting on December 16, without any ifs or buts. The ECB still has the Asset Purchase Program – used to buy bonds in the public and private sectors – which will run until the ECB finally increases key interest rates again.
DER SPIEGEL: And when will Lagarde raise key interest rates? Marsh: The ECB has to end PEPP first. Then, at some point, there has to be an end to negative interest rates on overnight deposits by commercial banks. But apart from that, the inflation debate is heating up because inflation is becoming stuck at a higher level.
DER SPIEGEL: That drives Lagarde into a corner.
Marsh: Yes. Then, she won’t just have problems with ECB hawks, but also with politicians from the right and the left. When, in a period of accelerated prices, people no longer get the returns they need on standard savings products, they will switch to real estate investments, fueling house and apartment price rises, including rents, with painful results for many consumers. Then the ECB would have to reckon with criticism from Germany’s governing coalition too, and not just from opposition politicians like Friedrich Merz and Markus Söder.’

The ‘de-Bundesbankisation of the German central bank’, that is a nice way of putting it and also a clear sign that Europe is moving to a closer union, for one, because the sovereignty of the nation state is crumbling in front of us.

And the pandemic might not be over, but PEPP is coming to an end.