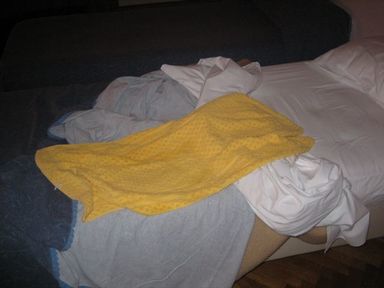 I’m staying at the Royal Netherlands Institute in Rome, where also a public discussion about my work took place earlier this evening. (The Italian journalist who was supposed to interview me never showed up, so my translator Franco Paris conducted the interview.)
My room here is called the Couperus room.
The towels are as big as a stamp, more or less.
I wonder if there’s a connection with Couperus, or that there is a hidden message for me; maybe I should not shower for more than five minutes, or not shower at all.
Everything is possible. The Dutch have a peculiar sense of hospitality.
Also I noticed that people enter my room when I’m not there. They put the toilet brush in the shower. I have no idea what this could mean, but I will be careful with the toilet, the toilet brush, the shower, and the towel.