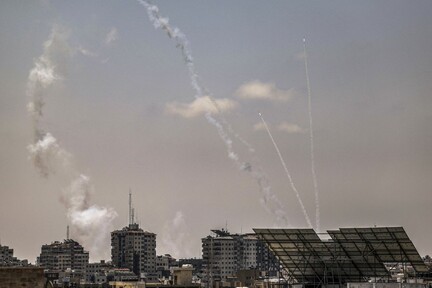 On Gaza and a déjà vu all over again – Anshel Pfeffer in Haaretz:

‘A day into Operation Breaking Dawn, Yair Lapid is in the position known in the Israeli Defense Forces as either tzalash, or tarash – either you get a citation for bravery, or you get demoted to the lowest rank. There’s nothing in between. Exactly five weeks since he took office, the prime minister is facing his first security crisis and at this point it could be the perfect boost to the credibility of a leader who has no real military record or experience in senior security posts. Or it could fatally brand him as an eternal civilian who should leave these matters to the real professionals.’

‘If this remains the case – if Hamas doesn’t join the battle and if hostilities do not spread to Jerusalem, the West Bank and Arab-Israeli towns and neighborhoods within Israel, and if this round of warfare ends in a few days without major civilian targets or a large number of casualties in Gaza or Israel – it will be an achievement for Lapid. In other words, he needs Operation Breaking Dawn to end in a similar fashion to Operation Black Belt in November 2019, the three-day confrontation between Israel and Palestinian Islamic Jihad in which no Israelis were killed, despite the launching of 450 rockets towards Israeli targets.’

‘But matters could change very quickly. With Jewish pilgrims heading to the Temple Mount for Tisha B’Av on Sunday, clashes with Palestinians at Jerusalem’s Al-Aqsa Mosque compound could serve as a flash point. And at any moment, an IDF air strike could go astray causing major casualties or an Islamic Jihad rocket could hit a home full of Israeli civilians, triggering a much wider escalation. In such a scenario, Lapid will be accused not only of mishandling the situation, but of having acted precipitately in the hope of proving he isn’t an inexperienced leader.
It’s not just Lapid’s leadership being tested now in Gaza. It’s the entire strategy his government has pursued over the past year. Lapid may support, in principle, the two-state solution to the Israel-Palestine conflict. In practice, this government which he formed, which was headed for most of its existence by Naftali Bennett, has had a strategy of “shrinking the conflict” – giving the Palestinians nothing in terms of political rights, but trying to reduce military friction by improving living standards in the West Bank and Gaza and helping the Palestinian economy grow.’

‘Over the past year, the government has granted over 14,000 permits for Gazans to work in Israel and intends to boost the number to 20,000. The government expects that these “levers,” along with other measures easing the 15-year closure of the Gaza Strip, will pressure Hamas not to escalate matters and jeopardize the livelihoods of Gazans, not to mention its own cut of the money entering the Strip.’

Shrinking the conflict might work slightly better on the West Bank than in Gaza. And it doesn’t do much more than buying time, but most if not all politics is buying time.

This has needless to say nothing to do with justice, but who is talking about justice?

The fact that Hamas hasn’t joined the fight is telling. But as has been said many times, also this time, things could easily spin out of control.

Hamas might enjoy secretly or not so secretly the fact that Israel is busy destroying Islamic Jihad, one competitor less. And once again, Hamas and Israel have an interest in preserving the status quo. They need each other more than Romeo needs Juliet.

Egypt and Qatar are there to make sure that things don’t spin too much out of control.

Just a little bloodshed, till the next bloodshed. Read my novel ‘The Jewish Messiah’.