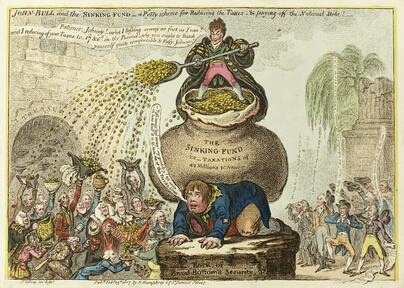 On time and money – Eric Rauchway in TLS:

‘Edward Chancellor opens The Price of Time by recounting the debate in 1849 between two members of the National Assembly of France, the free trader Frédéric Bastiat and the anarchist Pierre-Joseph Proudhon, who argued in a socialist newspaper over the legitimacy of charging interest. Proudhon repurposed his greatest hit, “property is theft”, declaring that interest too is theft; Bastiat argued contrariwise that interest constitutes a legitimate and socially useful charge for the use of capital over a period of time. The reader may feel that Chancellor need not rehearse these cases: diverting though disagreeable Frenchmen may be, we live in a time of capital’s triumph, when borrowing, both personal and national, has reached enduringly high levels. Debt is king, and surely Bastiat has long since won the argument. But, Chancellor warns, such complacency is unearned: modern-day Proudhonian anarchists occupy not the streets but the commanding heights, infesting the leadership suites of central banks and eroding the moral character of capitalism. Readers who find this proposition so absurd as to warrant no further perusal of Chancellor’s book will miss some intriguing history, a fair number of entertaining jeremiads and a gaping disparity between a problem acutely described and a solution barely proposed.’

‘Chancellor carries this story through the medieval period to the early-modern system of John Law – which caused the Mississippi Bubble and collapse – and on into the earliest years of the US Federal Reserve System at the start of the twentieth century, leaving off with the great crash of 1929. He then shifts to a new section, “How Low Rates Begot Lower Rates”, a discussion of our own time, interpolating further history as necessary. This shift from telling history forwards to telling history backwards deprives the reader of knowing how Chancellor would narrate the response to the Great Depression and its consequences, which – though he will allude to it occasionally – becomes an increasingly conspicuous hole in his story.
Instead one encounters Chancellor’s bracing condemnations of political economy in the decades around the turn of the twenty-first century, the time of central banks keeping interest rates low and targeting inflation. We live in an age of metrics, Chancellor says, and metrics beget manipulation. Tell people they may have a bonus for hitting a target and they will bang away at it like rats at the pellet-producing lever, irrespective of the collateral consequences. Our method of choosing targets is flawed: “quantitative targets get chosen because they are easy to quantify”, Chancellor writes, “but factors that aren’t easily measured tend to get overlooked”. Choosing targets simply because we can measure success there, without considering effects elsewhere, produces “adverse outcomes, including short-termism, the diversion of resources into bureaucracy, risk aversion, unjustified rewards, and the undermining of institutional culture”.’

‘The reason interest rates have stayed so low so long is that central bankers – the anarchists of Chancellor’s introduction – sought to avoid a new Great Depression in response to the financial crisis of 2007-08. This cheap money, Chancellor believes, has enabled not only financial shenanigans and the dissolution of manufacturing bases, but also the real-estate bubble, overvaluations of gee-whiz stocks such as Tesla and wealth inequality more generally. An unrelieved collapse, he writes, would have been preferable. “During sharp economic downturns … sales dry up. Bankers call in their loans and become reluctant to supply new credit. Firms must cut costs fast, laying off less productive workers and finding other efficiency improvements. The weakest players fail. Survivors emerge from the trial leaner and fitter, better adapted to the new business conditions. The broad economy benefits from this dose of salts.” The obvious rejoinder is that (as John Maynard Keynes observed) even if, in the long run, deflation, unemployment and bankruptcy benefit that abstraction “the broad economy”, in the long run we are all dead, and in a severe crisis (as Milton Friedman said of his own support for the New Deal) “the short run deserved to dominate”. Chancellor does not acknowledge that there might be a crisis so severe as to shift priorities towards relief.’

(…)
‘Despite Edward Chancellor’s more general conviction that regulations don’t work – “clever financiers can always find loopholes in the rules” – his own history supplies evidence that they do. And there could be more in that vein: discussion of how income taxes, welfare policies and financial regulation contribute to a more just and moral society. But readers will have to find it in books that explore remedies other than higher interest rates and a dose of salts.’

In the genre ‘killing your enemy softly’ this is a good one.

Cheap money has its disadvantages – what doesn’t – but it’s surprising that there are still people, in this case according to Wiki, a British financial historian, finance journalist, and former investment strategist, who believe in letting the weakest players fail in order to heal the economy. No healing without pain.

We have seen the consequences in the last century. Heal the economy, destroy the society.

The ideology is not dead yet.