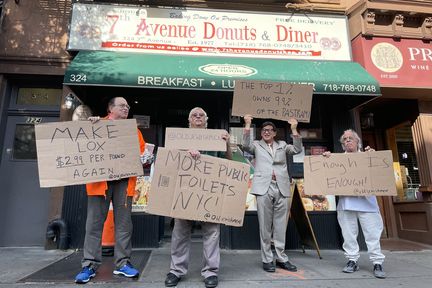 ‘By day, Mr. Roffe, a stout, 5-foot-2-inch retiree, lives in the Rockaways. But last Thursday night, at the first Old Jewish Men Fall Ball, an intergenerational mixer held at Congregation Beth Elohim in the Park Slope neighborhood of Brooklyn, he was the talent.
Mr. Roffe is one of the faces of Old Jewish Men of New York, a lifestyle brand that embraces Jewish cultural stereotypes and means no disrespect. The event introduced Mr. Roffe, a brand ambassador, to fans who recognized him from skits — including a TikTok video in which he protested rising pastrami costs at Katz’s Deli.
A crowd of old and young enjoyed Mr. Roffe’s cotton candy, alongside bagels and lox, in the dim light of the temple’s art-deco ballroom — just as the party’s host, Noah Rinsky, had planned.’

‘Mr. Rinsky, a 33-year-old Park Slope resident, is the creator of @oldjewishmen, a popular Instagram account documenting individuals from its namesake demographic. It builds on the tradition of self-referential humor that has been embodied by personalities like Jackie Mason, Rodney Dangerfield, Larry David and Mr. Rinsky’s own father. With memes and videos, the account hopes to honor personalities Mr. Rinsky found around New York — and in his own family.
The eccentric antics of Mr. Rinsky’s father, Jeff, inspired the account, originally called @dadaroundthehouse, which started in 2015. After the elder Mr. Rinsky moved to Tel Aviv, his son looked closer to home for examples of quirky humor similar to his father’s.
“I needed more old Jewish men because my dad wasn’t around,” Mr. Rinsky said.
At the time, Mr. Rinsky lived below a Hasidic prayer center on Manhattan’s Lower East Side. Men would frequently knock on Mr. Rinsky’s door to request his help in meeting the 10-person quorum required for conducting Jewish prayer. He began taking candid photos of the men and including irreverent captions.’

‘“It’s pure fun,” Mr. Rinsky said. “The food isn’t kosher, and not everyone’s Jewish, but they share the same desire to meet like-minded people who would be attracted to this same out-of-era event.”’

‘Attendees enjoyed the crooning musical comedy of Dani Luv, who had performed at Sammy’s Roumanian Steakhouse on the Lower East Side, which is now closed. There was food from Greenberg’s Bagels in Bedford-Stuyvesant and Edith’s in Williamsburg, two millennial-run Jewish sandwich shops. O.J.M. apparel — parody Mets merchandise emblazoned instead with the word “MEATS” — was available for purchase.
“I’m surprised that it’s almost exactly what it was billed as,” said Lucy Dolan-Zalaznick, 25, who works on the socials and visuals team at Vogue.
For Mr. Roffe (who hit the dance floor after his shift at the cotton candy machine), the fall ball was an opportunity to get out during a time of life when social opportunities have grown more sparse. But through experiences with O.J.M., Mr. Roffe has found new friends and new Hora partners.
“You have to live life like a kid,” he said. “You only come around once!” Without a brick-and-mortar store to call home base, O.J.M. plans to continue hosting pop-ups and socials at Congregation Beth Elohim and elsewhere (the brand’s next event, a comedy brunch show called Deli Laughs, presented at Stand Up NY, will take place on Dec. 11.) Mr. Rinsky also suggested there could be another ball this spring at the synagogue.
And the older guests? Many sat in folding chairs on the right side of the ballroom, nursing drinks and wondering aloud about the youthful crowd.
“Why aren’t they going to Justin Bieber concerts?” said Aliza Hyman, 58, from Brooklyn, who had stopped by for some cookies and scotch at the invitation of her friend Aaron Cohen, a 70-year-old paid actor who appears in O.J.M.’s skits.
“When I was that age, we would never come to a mixer that wasn’t hip,” Ms. Hyman said. She turned to her friend. “But maybe this is hip,” she said. “Maybe this is what’s happening.”’

Despite Groucho Marx’s famous saying I’d like would to attend one of the ceremonies. For anthropological reasons. And out of solidarity. After all, they are the future.