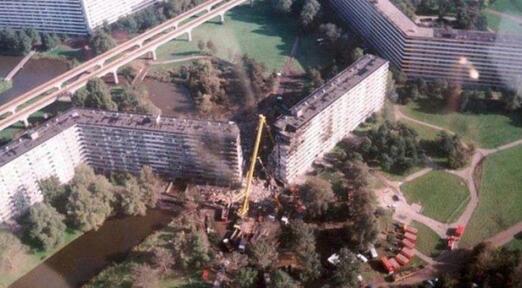 On a crash – Rajaa Natour in Haaretz:

‘What happened on that autumn evening in Bijlmer? And how were things handled in the aftermath of the crash, which was the worst in El Al’s history? These are the questions examined in Noam Pinchas’ upcoming documentary series “Dark Skies” (“Shamayim Afelim”) on HOT8, and the five-part Dutch drama series “The Crash,” now available on Cellcom tv.’

‘The El Al cargo plane that crashed just 15 minutes after takeoff from Schiphol, after losing two of its four engines (Nos. 3 and 4), had come from New York. It had landed at Schiphol earlier in order to refuel, on its way to Ben Gurion Airport in Tel Aviv.’

‘According to the official count, 39 residents were killed (the number may actually be higher since many undocumented immigrants lived in the area), along with four Israelis: El Al Capt. Yitzhak Fuchs; co-pilot Arnon Ohad; flight engineer Gedalya Sofer; and passenger Anat Solomon, the wife of an El Al security officer in Amsterdam. More than 50 apartments in the block were totally destroyed.’

‘All the parties involved in the crash evaded critical questions – or in some cases, spread false information. After several months, some Dutch journalists and residents recognized that this was a bigger story, one that involved vast sums of money, outside interests and politics.
The information that came to light was troubling. Engines 3 and 4 had disappeared along with the plane’s two black boxes. It was later said that the black box that recorded the flight data was found but had been badly damaged. The black box that recorded the cockpit voices, however, was never located.’

‘Eyewitnesses reported that several hours after the crash, figures in white coveralls were wandering through the site and collecting things. Some on the Dutch side alleged that 20 tons of cargo was not accounted for on the plane’s cargo manifest. Furthermore, Yitzhak Nir, who was an El Al Boeing 747 pilot from 1971 to 2010, says in “Dark Skies” that he flew the same aircraft three days prior to the crash and noticed that it was shaking, though he and his co-pilot did not think it suggested a serious problem.’

‘The immediate questions about the crash were what caused it, and who was responsible, El Al or Boeing? It was clear that whoever was held to be at fault would pay dearly for their mistake. Both organizations feared that being fingered as the culprit would lead to them being wiped out. A specially appointed Dutch commission of inquiry was appointed to uncover the reasons for the crash.
In “Dark Skies,” an investigator with the Dutch Civil Aviation Authority from 1984 to 2005 says the investigation team found a fuse pin (a safety bolt that attaches the engines to the wing) at the crash site. This led them to conclude that there had been a catastrophic failure due to metal fatigue.
Israeli journalist Shlomo Abramovich, who published a series of investigative reports into the Bijlmer disaster and was also interviewed for “Dark Skies,” says that Boeing knew there was a problem with those pins. In the 1980s, he asserts, they were found to be vulnerable to corrosion, and Boeing subsequently manufactured a new pin to counter the problem. However, since Boeing did not make replacement of the pins mandatory, El Al never replaced them.
Nahman Kleiman, El Al’s spokesman from 1983 to 2002, insists that no one was told to replace the pins. Instead, it was presented as an option – either use the old pins with regular maintenance, or replace them with new ones. El Al chose to maintain the old pins.’

‘The Dutch commission of inquiry investigating the circumstances of the Bijlmer disaster concluded that the structure of the Boeing 747 did not provide the necessary level of safety. In order to avoid astronomical financial losses, two years after the disaster Boeing replaced the engine attachments on its 747s and paid for their replacement throughout the industry. Local residents who sued the aerospace manufacturer for damages received a laughable amount of compensation: $3,700 per person.’

‘Now the question at the heart of the affair changed. It was no longer about why the plane crashed, but what was it carrying? Until 1997, when the Netherlands established a parliamentary commission of inquiry into the affair, both El Al and the Dutch government insisted vehemently that the cargo consisted solely of flowers, perfumes, computer components, textiles and spare parts for the Israel Defense Forces. El Al categorically denied, according to a 1997 report in the Israeli financial daily Globes, that explosives, missiles or any kind of armaments were on board.
El Al also rejected residents’ claims that the plane had a cargo of active uranium, which was dispersed in the vicinity of the crash and caused mysterious illnesses among residents, including babies, in the following years.’

‘But the allegations did not disappear. A report published by the Dutch newspaper NRC Handelsblad (currently called NRC) in October 1998 claimed that the cargo plane was carrying spare parts for Patriot and Sidewinder missiles, and about 10 tons of chemicals, including hydrophosphoric acid, isopropanol and about 190 liters (50 gallons) of dimethyl methylphosphonate – three of the four chemicals needed to make the nerve agent sarin. The report also claimed that about 400 kilograms of depleted uranium used as ballast during the plane’s construction melted in the fire.
According to the cargo manifest, which came to light more than six years after the disaster, the chemicals were destined for the Israel Institute for Biological Research in Nes Tziona. According to Globes, the Dutch investigation forced El Al to admit that the plane had carried a shipment of dimethyl methylphosphonate. The airline stressed that the Dutch authorities were informed of the chemical’s presence immediately after the accident and that representatives of the Dutch Transport Ministry received the original bill of lading.
The Dutch, who now found themselves in a very awkward situation, strongly claimed that the full cargo specifications did not reach them at any stage, and that information about 20 of the plane’s 114 tons of cargo was not included in the documentation provided to them.’

(…)
‘The inquiry also found that there was a direct link between the disaster and the health problems; that the government’s slow and dismissive handling of the matter increased the medical complaints; and that in light of the relatively large number of reports of autoimmune diseases in Bijlmer, it seems that the health risks of exposure to depleted uranium in this manner were not sufficiently known.
The commission also determined that there were no technical or maintenance issues with the plane at takeoff, and that no hazardous materials were found that international regulations prohibit by air transportion.’

‘Bendanon and other residents are right. This failure had several layers. There was a collective cover-up that served everyone involved very well. In fact, no person or organization paid a price for this disaster – except for the victims and survivors, of course. El Al and Boeing were saved from the threat of extinction; the Dutch government stood by its ally, Israel, and covered up its failures. Even the three Dutch ministers who were found responsible for the failure were not forced to resign.
In the face of the Dutch-Israeli alliance, in addition to the economic interests of business empires such as Boeing and El Al, the residents of Bijlmer never stood a chance. The cover-up made them victims twice over. As they see it, the circle has yet to be closed.’

The cover-up served all players well, except for the victims.

Twenty tons of cargo remains a mystery, thirty years after the crash, and the health problems are still shaking up the lives of the people who lived in the Bijlmer and their descendants.

The reluctance of serval Dutch governments to delve deeper into the matter is at best just convenient for most people involved. But it is also possible that the Netherlands didn’t want to cause any problems to its ally: the US. After all, the flight had started in NY.