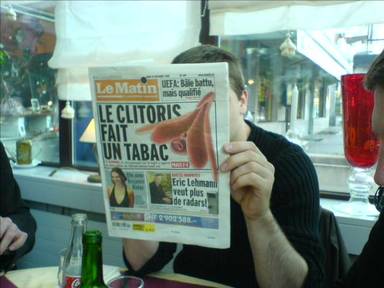 A couple of days ago a friend alerted me to an article by Daniel Bergner about female desire that appears in today’s NYT Magazine. (It’s hard to miss.)
Daniel Bergner writes: ‘The study Chivers is working on now tries to re-examine the results of her earlier research, to investigate, with audiotaped stories rather than filmed scenes, the apparent rudderlessness of female arousal. But it will offer too a glimpse into the role of relationships in female eros. Some of the scripts she wrote involve sex with a longtime lover, some with a friend, some with a stranger: “You meet the real estate agent outside the building. . . .” From early glances at her data, Chivers said, she guesses she will find that women are most turned on, subjectively if not objectively, by scenarios of sex with strangers.’

It doesn’t come as a big surprise to me that anonymous sex is appealing. It’s a relief that you don’t have to sit down for dinner with the person you just had sex with.
We should allow ourselves to say after intercourse “it was swell” and go home.

To avoid misunderstandings: I don’t object to having dinner or lunch before sex. It doesn’t have to be “Last Tango in Paris” all the time.

This article about Daniel Bergner might be of interest as well.