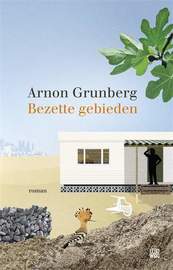 Otto Kadoke, the transgressive psychiatrist from Birthmarks returns in Occupied Territories: after a well-known author published the story of his alternative therapy and it became a best-seller, Kadoke becomes entangled in a web of halftruths, interpretations, and lies that cost him his job - and destroy his reputation. What’s more: his mother has become a father again at that point, while the father’s caretaker turns out to be an inexhaustible supporter of Christians for Israel.

One day, when all seems lost, a distant relative turns up at the door; it is in her that Kadoke sees a chance to escape. She brings him - and his father - to the occupied territories, where he is welcomed as a messiah, despite his reservations. Occupied Territories is a deeply human, but also comical novel about the past spilling into the present and future, about guilty affairs at innocent places and innocent affairs at guilty places.

The book was presented in private at the assisted living facility for the elderly Beth Shalom in Amsterdam on the 9th of January 2019. Public presentations were organized in Amsterdam (Pakhuis de Zwijger) on the 10th, and after that The Hague (Paagman) on the 11th, Antwerp (De Groene Waterman) and Eindhoven (Natlab) on the 14th, Hengelo (Broekhuis) on the 16th, Amstelveen (Blankevoort) and Amsterdam (Linnaeus) on the 17th, and Gouda (Verkaaik) and Rotterdam (Donner) on the 18th of January. At most locations, Arnon Grunberg arrived with a caravan in which the book signings would take place.