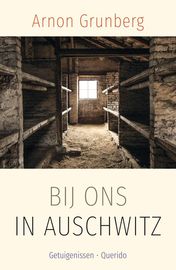 On the 27th of January, 1945, the concentration and extermination camp Auschwitz was liberated by the Red Army. At least 1,1 million people were murdered here: men, women, and children, predominantly Jews. Most of the eyewitnesses, the prisoners who managed to escape from the camp, have since passed away.
On the occasion of the 75th commemoration of the liberation of Auschwitz, Arnon Grunberg gathered texts from ‘moral witnesses’, witnesses that fell victim to that terror. Ranging from Primo Levi’s ‘Is this a man’, written right after the liberation, and the lesser known, gripping work of Tadeusz Borowski to the texts by Zalmen Gradowski, who was killed in Auschwitz — he buried his writings near one of the crematoria.

Bij ons in Auschwitz ('We were in Auschwitz') is an anthology of accounts from the Lager.